(FRANK TALK) Age falsification and a nation nurtured on forgery

A few hours after Oyo State-born Olukayode Ariwoola was sworn in as Acting Chief Justice of Nigeria, the shit hit the fan.

Social media became abuzz with what can best be described as the “unauthorised biography” of Justice Ariwoola. 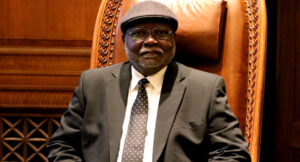 Of course, this is not impossible. Many of these silver-spoon children of today start off that early, especially when both mummy and daddy have to go to work as soon as the maternity leave is over. But then, we would have to include daycare homes as part of school.

But for those of us, born in the 50s and 60s, who had to wait until they could touch their left ears with the fingers of their right hands, from across the top of their heads, before they could be admitted into elementary school, it was almost impossible to accomplish that feat before Age 5.

But the netizens could be wrong! Their generation does not know there was such a thing as ‘je le o sinmi’ (transliterated as: let there be peace at home). It was the forebearer of today’s kindergarten, where the parents of old used to send their preschool babies, to enable mothers to concentrate and do some work (either at the home, farm or market) for the few hours the babies would be away.

The only snag is that no mother would ever send a baby she’s still breastfeeding to ‘je ‘le o sinmi’ (known as ota akara – the bean-cake eaters class, among the Igbos). If there would ever be such aberration, it wouldn’t be in the Iseyin of the 1950s.

But then, what do I know!

After all, the man Ariwoola is taking over from was virtually a walking ancestor – who, according to the law (which they say is an ass), by the way, is not 70 yet. It did not matter that he was alleged to be battling with all the old-age-related infirmities and challenges.

Even Justice Dahiru Musdapher, one of Tanko Muhammad’s predecessors in the CJN office, did not look a day younger than 80 years on his inauguration.

And since the names of Their Lordships regularly creep into this age falsification (sorry, age adjustment) gossips, it becomes herculean, if not impossible, for them to call out the politicians and other public servants engaged in the same racket.

So, when a public officer is caught out in a similar mess, the jurists find a technical ground to let them off the hook, while avoiding the real substance of the matter. The security ‘operathieves’ call it esprit de corps. It means: there’s honour among thieves.

That is why I get angry when people disturb my eardrums with all this idle talk about Asiwaju Bola Tinubu’s age and certificates. Pray, what certificates did Buhari show us before we elected and re-elected him President? And what difference did it make when the Supreme Court was brought into the mix?

For me, the issue should be about what Tinubu has done and what we think he can do. Any other thing, for me, is a distraction. And that includes even the concerns about his health. Truth is that if we all come clean about our medical histories, many of those occupying, and aspiring to, public office today would have no business there. The situation would become even more alarming if we add mental and psychological health to the mix. There are lunatics, perverts and drug addicts in the commanding heights of our polity today, so much so that age falsification pales into insignificance. Everyone chips a few years off their age.

In fact, I dare say, it was probably my generation that did the opposite, adding a few years to their age. We went to school when WAEC, JAMB and the universities were still very serious about the minimum age of candidates. Many of us who were not 12 years old before sitting for common entrance had to swear to affidavits that we were. Those who weren’t 16 years old at their matriculation into the university also had to falsify their age via court affidavits.

So, what’s all the fuss about certificates and age of presidential aspirants?

(FRANK TALK) Obiano signs off on a slapping note

Even Obasanjo who we elected, re-elected, and almost gave a third term was guilty of the same fraud. But OBJ was smart, albeit by half, about it. He rubbed it into our faces by ‘confessing’ that he did not know his exact date of birth. That he just picked any date that caught his fancy and ran with it. Even when it became clear that his new age suddenly made him younger than his contemporaries, and even many of his known juniors, he refused to swear to a new age declaration to reflect new realities. The reason was simple: any such readjustment could wipe off all the advantages conferred by the official age.

So, in Nigeria, most of us in public service have two ages – the real age, and the official age. We even have such a thing as “FOOTBALL AGE” to reflect the ridiculous level we have sunken with age falsification in sports, especially in football, where age group competitions are a big thing.

My friend, Simon Kolawole, and I used to have a joke about a certain football player he once interviewed. When they broke down his given age, it turned out that he graduated from the College of Education as a 10-year-old. Even he was so embarrassed that he quickly chipped in: “na my football age be that o!”.

Of course, age cheating had always been a part of our age-grade football, and, I dare say, the bane of our football development. It even earned us a sanction from FIFA at some point. We’d use stunted old men, who are already at the peak of their football careers, to prosecute (and win) age group competitions, only for the supposed child-stars never to blossom into the senior national team. So, barely five years after, when the other kids from Europe and other parts of the world, whom they played against at junior levels, are exploding onto the global football stage with their professional careers, our own ‘children’ are retiring, having hardly made any meaningful mark after their exploit at age-group tournaments.

Our football annals are littered with fables of the Philip Osondus and Little Messis of this world. The Olumide Harrises, the Furo Iyenemis, the Dombrayes and, to some extent, the Julius Aghahowas of this world.

I once had the good fortune of dating the young niece of the girlfriend of a Nigerian footballer. The footballer was much older than me and I always deferred to him as “egbon” each time we ran into each other at our consorts’ family house. I wasn’t even old enough to call his girlfriend by name: I always prefixed her name with ‘Auntie’ – the cultural deference accorded a young woman older than oneself.

The reality, however, was that, by 1987, when ‘egbon’ was representing Nigeria at the Under -16 level, I was already 19, and an undergraduate.

But I sometimes feel for the age cheats in public service.

I think the problem stems from this our practice of adopting everything the West sets as its standards. Some of the practices land us in a bind.

Take football for instance. I’ve always believed there’s something in the gene of the Black African that enables him to withstand physical exertion far beyond the limit of the average White person. So, while the average White is completely finished in football by 35 years, the average Black man can go on for well beyond 40. After his outing at 46, Roger Milla could have played another World Cup. The same was true of our own Peter Rufai.

But for the glut of players, Jay Jay Okocha can still fit into any national team today, the same as Daniel Amokachi and even lazy-looking Kanu Nwankwo.

The same thing also plays out in our public service. People, some of whom are only beginning to burgeon, are suddenly forced to retire because 60 years (or in a few cases, 70 years) just crept up on them. Those who are not stopped by age are stopped by the 30-years civil service rule.

The likes of Justices Kayode Eso, Chukwudifu Oputa, Mustapha Akanbi, Mohammed Uwais, Fati Abubakar, Mary Odili etc. could have gone on and on.

The situation is even worse with our Generals and the military.

But then, there is a flip side to the age debacle. Many so tweak their ages that more often than not, we have men and women who have long passed the age of making any meaningful contribution to national development, still hanging on to public office, even as their appearance and carriage put a lie to whatever age they have on the affidavits in their files.

It all comes within the territory of our fundamentally rigged and fraudulently warped federal system. A forgery of some sort. A foundation built on forgery and falsification!

I’m sure, by now, even President Buhari, who has himself been mentioned in the age tweaking game before now, would be wondering what he’d do to please Nigerian wailers. After easing out a CJN whose qualifications had, even if in hushed tones, been called to question (and who insisted on ‘driving an aircraft’), and replacing him with a whiz kid who literally started school from his mother’s womb, the wailers are still wailing. The quack doctors among them are even alleging that the new man is just as sickly as his predecessor who, officially, stepped down as a result of ill-health. Haba!

(FRANK TALK) Obiano signs off on a slapping note

(FROM THE INSIDE) BUHARI’S KIND OF KINDNESS