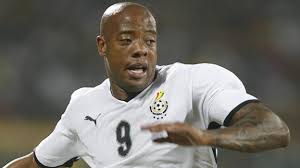 Former Ghana, Nottingham Forest and Bristol Rovers striker Junior Agogo has died at the age of 40.

Agogo, who began his career at Sheffield Wednesday, played 27 times for his country and scored 12 goals.

He finished his career at Hibernian in 2012 having also had spells in the United States, Cyprus and Egypt.

Agogo suffered a stroke in 2015 and struggled with his speech afterwards.

Agogo sealed his place in the hearts of Ghana fans with his performances at the 2008 Africa Cup of Nations where he scored three goals including a late winner against Nigeria in Accra.

“I think that was the goal that sealed his popularity in Ghana,” Laryea Kingston, the former Hearts midfielder said.

“During the tournament we could feel his influence in the team grow and his popularity go up but that goal sealed everything.”

Despite playing alongside big names like Michael Essien and Asamoah Gyan, Agogo was the team’s star man.

“A lot of fans didn’t know but those of us in the team knew he was going to be good for us,” Kingston added.

“He spent a lot of time in the gym and his strength reflected in the way he played. He simply wanted to score goals and make a mark for the team and I am glad he did.

“He had a word for everyone, enjoyed a good dance, could tease a lot and take it too. This has really hit a lot of us.”

His former clubs were among those to pay tribute on social media. (NAN)

Police in Enugu investigate death of woman in a farm