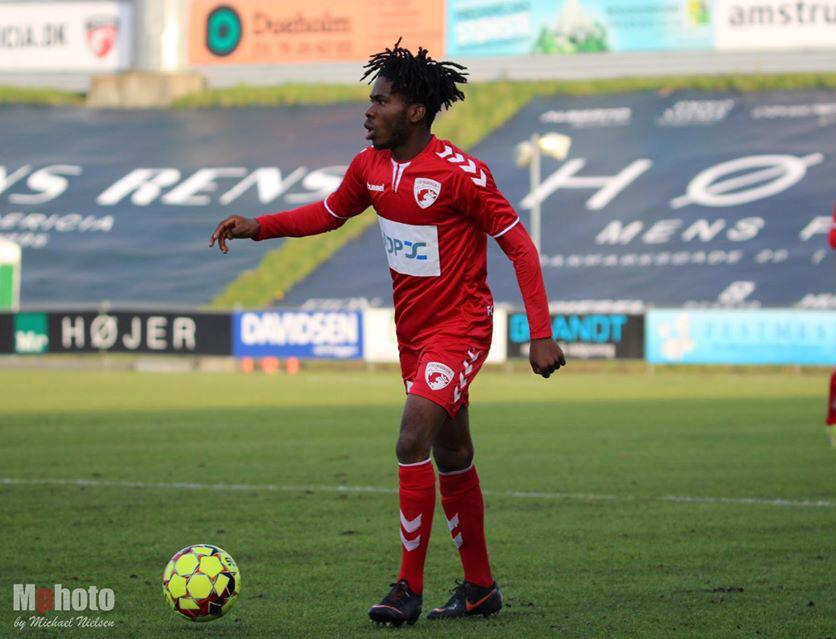 Denmark based Nigerian football Star, Henry Uzochukwu says he is available for national duty if called up for senior national football teams.

Uzochukwu, a defense bulwark who plays for FC Midtjylland told the News Agency of Nigeria (NAN) in Awka on Monday that he was both ripe and ready to contribute his quota to the national team but was waiting to be given the opportunity to prove his mettle.

The player, who was presently on loan to Fc Fedrericia, a First Division side also in Denmark, said there were a lot of football stars in country’s league but regretted that they had not been getting attention of Nigerian football managers .

Uzochukwu, who said he would turn 21 in January 2020, said he had a lot to contribute to the national U-23 and Super Eagles adding that he was ready for the challenge as the Danish league had helped to bring out the best in him.

“Danish League is tough and it is bringing out the best in me, by January, I will be 21, so I am available for U-23 Super Eagles duty.

“I am ripe for national team call up, that is the next challenge I am looking forward to, though it is competitive but I know I am equal to the task.

“It is good for players to be invited based on what they do  in their club, how they contribute to the success of their clubs, current form and not who they know or who knows them.

“In Denmark, we have a lot of Nigerians who are doing well but we are not lucky to get the attention of Nigerian football managers; most times they go for those they already knew,” he said.

The Anambra born defender said he had been getting good playing time with  FC Fredericia and had helped them in their success this season.

“I have been in Denmark for three years, but before then I had played for my grassroots club United Star Soccer Academy, Obosi, Anambra, managed by Coach Benson Udeh, before joining Kwara State Football Academy and later FC Ebedei in Ogun.

“Now, I am on loan to  FC Fedrecia, good thing is that I am enjoying more playing, this season, I have played 14 matches out of the total of 18 we have played so far and currently we are second on the table,” he said. (NAN)