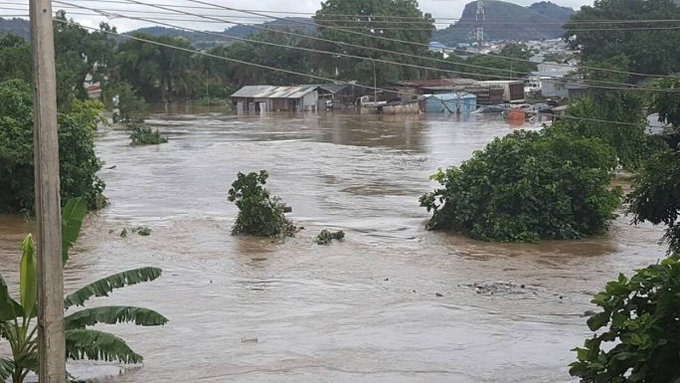 Following a heavy rain in parts of the state, on Wednesday, traders and marketers of the popular Umungwa-Onuimo market, generally known as ‘Malaysia market’, situated at Obowo Local Government Area of Imo State are now counting their losses, as their shops and wares were washed away.

The flood not evacuated goods and property worth millions of naira, but it also covered houses, shops, cars at the mechanic village, including the major roads that led to the main business areas.

For about one week now, there had been constant rainfall in Imo State and some neighbouring states, which apparently, might have been the reason for this unfortunate disaster.

As early as 6:00a.m. when marketers, buyers and sellers went to the market, there was nowhere to stand inside the market, due to the height of the flood in in the market, which was described as “River Niger in Imo River” by some sympathisers.

Speaking to the traders and sympathisers at the market, Hon. Ibe said: “It is very unfortunate that I am coming here again, after being here two months ago for this same purpose.

“This time around, I call on the Federal Government to come to our aid. I know the Government of Imo State under the good leadership of Rt. Hon. Emeka Ihedioha is working towards providing a lasting solution to it, but it is equally obvious that this same rebuild Imo government has a lot of things to do, ranging from the bad roads that can be seen in every part of the state, with very poor drainage, all as a result of the poor management of the state by the previous administration.

“The best way to know a good government can be seen in the responsibilities and responsiveness of any government; am aware that National Emergency Management Agency (NEMA) was here after I left.

“They have taken note of the rate of damages here before, therefore this time around, I call on the Federal Government to partner with the state government in finding a lasting solution to this ordeal”.

It would be recalled that few months ago, precisely in July 2019, there was a similar situation in the market, where goods and property worth millions of naira were destroyed and evacuated. Then, the Obowo LGA Imo Management Committee members came to ascertain the level of damages in the market.

According to him, “Honestly, I have not seen it like this before. I thought the last one was too much, but with what am seeing here, this is River Niger in Imo River.

“These people here have suffered, after losing millions of naira not too long ago, some of them started afresh, now most of them have lost another millions, in less than two months.

“I wish I can do something personally, but, I trust the Government of Rt. Hon. Emeka Ihedioha; he is Omenkeahuruanya, surely he will do something tangible”.