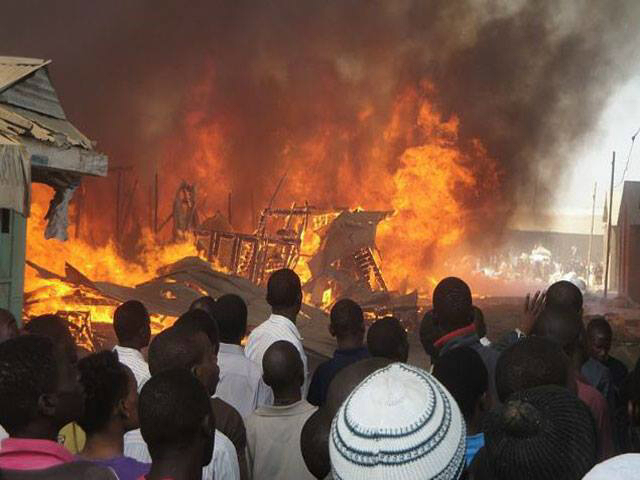 The service said in a statement that the cause of the fire, which occurred on Sunday at 10:49 p.m., was unknown, but investigation had begun.

Alhaji Saidu Muhammad, the Public Relations Officer (PRO) of the fire service, confirmed the fire in the statement made available to newsmen in Kano.

“We received a distress call on Sunday at about 10:49 p.m from Emergency Communication Centre (ECC) that there is fire outbreak at the market.

“We quickly sent some personnel and fire fighting vehicle to the scene at about 10:55 pm to stop it from spreading to other shops,” Muhammad said.

READ ALSO: http://JUST IN: Many pro-Ihedioha protesters injured in Abuja as truck conveying them tumbles

He said that one of the shops was completely razed, while two others with three vehicles were slightly burnt.

He said there were no casualties, but property whose value had not been estimated, were lost to the fire.

In another development, the service spokesman said that three shops were slightly burnt and one Usman Muhammed was trapped at Dorayi Chiranchi in Gwale Local Government.

“It is a shop used for exchange and selling of gas cyclinder. We received a call from Muhammed (victim) at about 11:46 a.m. that there is fire outbreak at Dorayi.

“Our personnel got to the scene at about 11:54 a.m to save the victim and stop the fire from spreading to other shops,’’he said.

The spokesman said that the victim was rescued, but sustained slight injury and was handed over to his family to take to the hospital for treatment.

He advised traders to be more careful and desist from using instruments capable of triggering fire and also to guard against recurrence.

Muhammed called on residents to keep fire buckets, blankets and extinguishers at home to enable them curtail outbreak before calling on the service. (NAN)