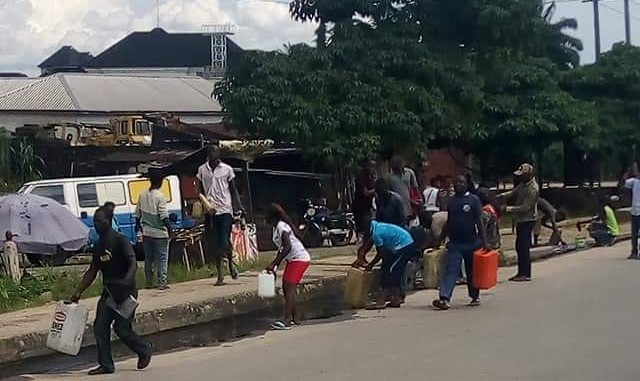 Share
Blessing Okorite, Port Harcourt
Few months after many people died in fire incident resulting from oil pipeline explosion in Kom-Kom community, some residents in Rivers State were on Thursday evening sighted scooping fuel from a petroleum tanker which fell at Obiri- Ikwere flyover in Obio/Akpor Local Government Area of the State and spilled its content.
It was learned that the tanker driver in a bid to make a U- turn at the said spot suddenly lost control and fell at about 4pm.
An eyewitness, Miss Chinwe Godbrings, said the fuel, did not spill immediately the tanker fell but few hours later.
She disclosed that some residents who sighted the spilled products  swiftly rushed to their houses, shops calling neighbours as they gathered and started  scooping the spilled products curiously.
READ ALSO: Obaseki plans to abandon APC, says aspirant
Some of those scooping the duel in an interview, noted that they are aware of the dangers associated with tanker fire but claimed that hard times forced them to be scooping fuel irrespective of the warnings.
One of them who refused to give her name said, ” For some days, I and my children have not eaten, the little business I do on the road side, the State Government has ordered its men not to allow us again, so its better we eat and die than to die out of  hunger’
Contacted, the State Public Relations Officer of National Emergency Management Agency (NEMA), Mr. Victor Ekong, said the emergency team of the agency would be mobilized to the scene immediately to arrest the situation.
The NEMA spokesman noted that the agency has been carrying out adequate sensitization and awareness on the dangers of scooping fuel and expressed dismay over failure by the public to hearken to advice.
Related Posts