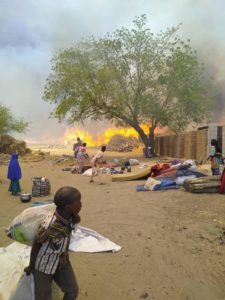 The SEMA Director of Rescue Operations, Malam Usman Kachala, made the disclosure in an interview with the News Agency of Nigeria (NAN) in Maiduguri on Friday.

Kachalla said that 38 shelters were destroyed, while dozens of households in the camps were displaced during the fire outbreak which occurred on May 21.

He said that the fire which started from an IDPs tent, gutted other shelters because there was no immediate fire service response in the camps at the time of the incident.

Kachalla said that the agency and other partners were working to address the humanitarian situation at the camps.

The Ngala IDPs camp is the second highest IDPs camp in the state, housing some 14,000 households.

The Boko Haram insurgency, which forced people into the camps has killed more than 27,000 people and displaced 1.8 million others in the North-East.

The insurgency has since spread to neighbouring countries, including Niger, Chad and Cameroon, prompting a regional military response to fight the jihadists.

The Boko Haram insurgents have waged a deadly war in Nigeria since 2009 in a bid to enforce a strict Islamic code. (NAN)