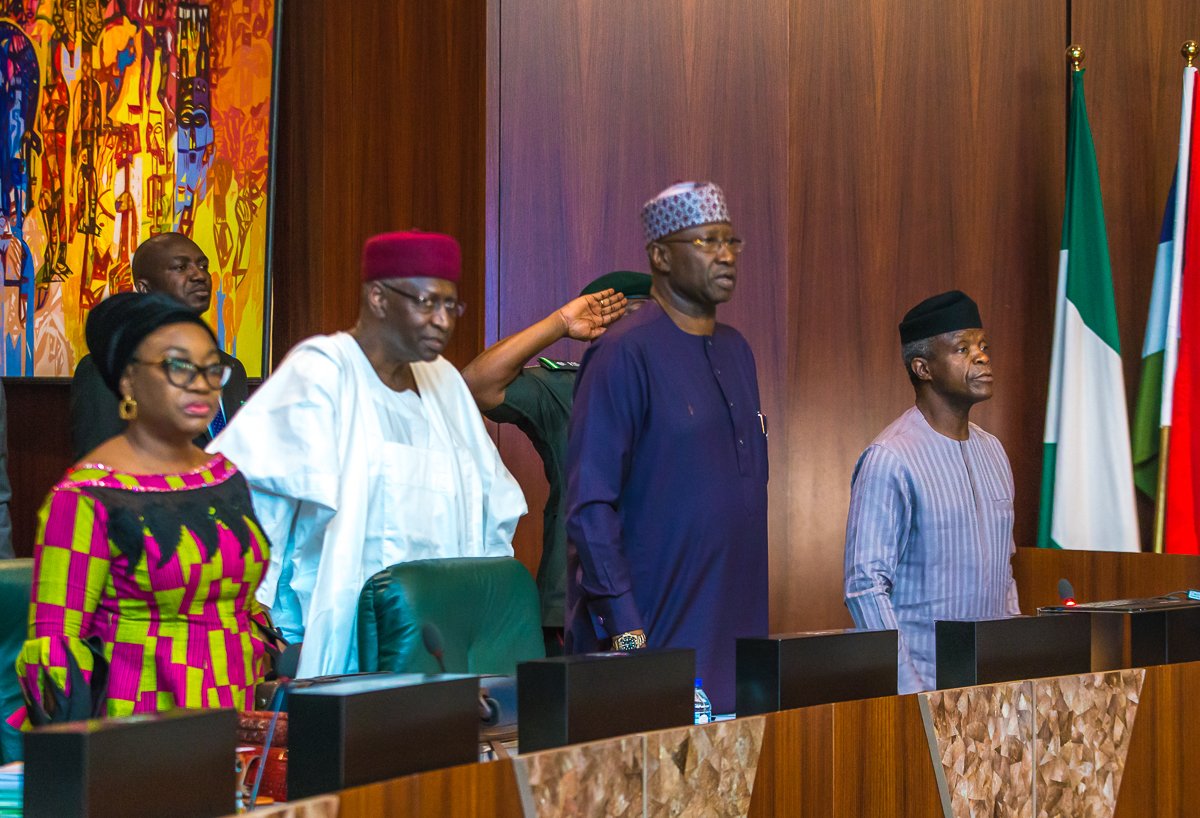 Share
From  Abuja
The Federal Executive Council meeting presided over by Vice President Yemi Osinbajo, has approved contracts totaling N311.473 billion to Works and Housing and Education ministries.
The Minister of Works and Housing, Babatunde Fashola briefed State House Correspondents at the end of the almost four hours meeting chaired by Vice President Yemi Osinbajo at the Presidential Villa.
The highest approval of N79.8bn, was approved for the construction of the Ibadan-Ilesa-Ife Road, cutting through Oyo and Osun States.
Fashola, who spoke on road projects approved by FEC, added that two other memos were approved for the 2nd Niger Bridge link roads and the Kano-Katsina Highway.
On the link roads, he explained that one would provide access to the bridge from the Asaba end in Delta State, while the second one would link the bridge from Onitsha in Anambra State.
The total cost of the two link roads was put at N200.1 billion.
“These contracts will complete the link roads that will access the bridge from both ends,” he said.
READ ALSO: Buhari condoles VON DG, over wife’s death
Fashola added that the sum of N29.6 billion was also approved for the Kano-Katsina Highway.
He said the project, a phase II contract, was to convert the 78-kilometre road to a dual-carriageway.
Related Posts

Fashola added that the Goodluck Jonathan’s administration had handled the Phase I part of the project, which was a single lane.
He gave details, “The Asaba link-road was awarded to Julius Berger and the Onitsha link-road was awarded to Reynolds Construction Company at the total cost of N200.176 billion.
“So, these complete essentially the access roads that will link the bridge in the short time. You might recall that these roads were under design when the bridge was awarded.
READ ALSO: Tribunal: Adeyeye heads to Appeal Court
“So, it is this administration that completed the design and we now awarded them so that you can have a bridge that has link roads. This was awarded initially under a Public Private Partnership and the bridge in 2010.”
On the Kano-Katsina Highway, Fashola said, “This is a 78Km stretch approved at the sum of N29.654 billion. That road is a 172km road linking Kano and Katsina road from Kano. It was a single lane highway until it was awarded in 2013 by the previous administration in phase I.
“So, we inherited it and we have continued to execute it. The award was to then expand the road into a dual-carriage highway . That means we are constructing the existing one and building another new one.
“It was awarded for the first 70km plus for the phase I; what we have now done is to complete the award to the same contractor so that there is a uniformity of construction.”
The FEC also approved two other projects for the Ministry of Education under the Tertiary Education Trust Fund Programme.
The contracts were for the building of the Faculty of Education, University of Abuja, at the cost of N918 million and another N915 million approved for the Faculty of Environment building in the same university.
The Minister of State for Education, Mr. Chukwuemeka Nwajiuba, spoke on the education contracts.