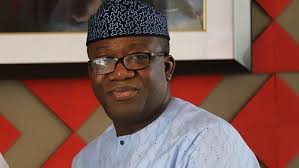 The Director-General of Ekiti State Council of Arts and Culture, Amb. Wale-Ojo Lanre, has said that Governor Kayode Fayemi has brought life to the state’s culture by  his policies of values re-orientation, cultural rejuvenation and arts and culture re-branding among others.

The Ekiti culture boss said this, at the weekend, in Ita-Ogbolu, Ondo State, during the conferment of a traditional title on Ekiti State Commissioner of Information and Values Orientation, Hon Muyiwa Olumilua and wife, Olufunke, as the ‘Aare Bobagunwa and Yeye Aare Bobagunwa’ of Itaogbolu kingdom, in Akure North Local Government Area of Ondo State.

Responding to a question on whether western ways were eroding our cultural heritage, Wale-Ojo said, ” A loss to culture is a loss to pride and personality, the Britons, everyday export their culture in the way of eating, talking and doing other things to other aspects of the world.

“They came here to colonise us, indoctrinated us, they forced us to accept their culture and took our culture away from us.

“In Ekiti State, we are revitalising our culture, festivals, promoting values orientation, and that is why we must commend Governor Kayode Fayemi for his strides in resuscitating culture, though it is being eroded but we are salvaging it in Ekiti State.”

Wife of the governor, Erelu Bisi Fayemi, APC party faithful and other dignitaries graced the occasion.

The Ogbolu of Ita-Ogbolu, Oba Idowu Faborode, while expressing happiness of the successful conferment on the Ekiti indigenes, said, “former governor Olumilua and father of Muyiwa Olumilua, was a very supportive figure to the people of Itaogbolu as the then governor of old Ondo State.

“In order to naturalise and further cement the long existed ties, gave birth to the chieftaincy idea”, he said.