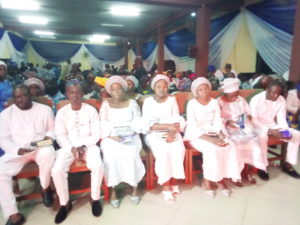 Family, friends and Colleagues of the late Dr. Sijibomi Olusanya, Immediate Past Provost of the Federal College of Education ,Technical (FCE)(T) Akoka, on Wednesday mourned at his Wake.

The News Agency of Nigeria (NAN) reports that the late Olusanya died on July 9 in the U.S, following an undisclosed ailment at the age of 61.

He served as provost of the college for two terms, between year 2011 and May 2019 and led the college to remarkable height of achievements.

In his remark, Mr Abidemi Olusanya, Son of the late provost, described his father as a loving husband , a unique man and a mentor like no other .

Olusanya said the family had reasons to celebrate the death of his late father because he planned his life with God.

“I cannot wish for a better dad because he possesses everything you need in a father and if I could choose a father in my next world ,I will choose him again,” he said.

Dr. Ademola Azeez, the Provost of the FCE, Akoka, said the college would miss the late provost, as his sudden death would deprive the institution from gaining from his wealth of experience.

Azeez described late Olusanya , as a man of peculiar administrative style ,whose demise posed a challenge.

“The college is involved fully in the burial of the late provost because of his immense contribution to the growth and development of the institution.

“I urge all the members of staff to reflect on the death of the former provost and allow peace to radiate among us.

God is the best judge, not the positive or negative testimony given about the dead, ” he said.

A neighbour to late Olusanya, who was simply identified as Mrs Adetanin, described him as her benefactor because he assisted her family greatly financially and also secured admission for her son and offered him scholarship too.

Dr. Izeom Ignatious, Former Provost, FCE Asaba, said the late provost was not his friend but a brother in the comity of Provosts.

Ignatious said the late Olusanya was a true christian ,who lived an exemplary life with his wife.

“I urge you all to forgive him ,in case his style of leadership offended you in any way or the other because it is not possible to lead without stepping on toes ,” he said.

In his Exhortation, Pastor Idowu Akande, titled his sermon as Death and the Hereafter and while reading a scripture from Hebrew 9 vs 27, said death was an appointment with the creator that it was mandatory.

Akande explained that death actually does not close the chapter of a man’s life but it was rather a transition to a curtain raiser for an eternal life .

“Physical death will surely come and when it does, it should not be strange to anyone, what should be strange is life in the hereafter, ” he said .

Akande, however, enjoined all to forsake sin and live holy to enable them make heaven in the hereafter.

NAN reports that the late Olusanya born on July 29, 1958 to Late Pa Olutunde and Victoria Olusanya from Ijebu -Ode in Ogun State, began his career in the college in 1981 before he rose to become the Provost in 2011.

He is survived by his wife ,Mrs. Olusola Olusanya and three children ; Abidemi Olusanya, Salisu Olubowale and Sole Olubanke.

As slated ,lying in state and academic procession for the late provost would hold on Thursday while his remains would be buried afterwards at Vaults and Gardens ,Ikoyi. (NAN)

Appointment of Adebayo, “Round peg in a round hole”—-Ekiti speaker