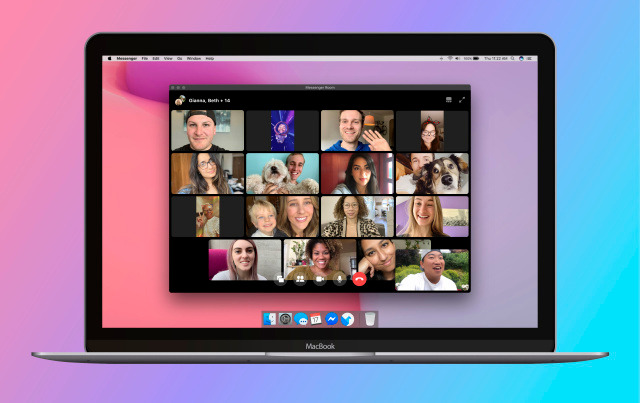 Zoom, the video conferencing application, has one more rival to contend with. This time, it is the social media giant, Facebook.

It is getting crowded with video conferencing following the entrance of Facebook, whom experts believe will, in no time, become the dominant player in the sector.

A new Facebook update will allow you to create a Facebook Room on its Messaging app which allows you to hold virtual meetings with up to 50 people, even with people who is not on your friend list.

Following the outbreak of COVID-19, many people and firms were forced to adopt ‘work from home’ style. Soon, kitchens and dinner tables were turned to offices and classrooms as the need to find a balance and still meet while marooned at home became necessary.

Zoom became the pandemic’s social network and the lifesaver for many, prompting others to inch into its territory.

Facebook’s foray into video conferencing follows similar move it made with its premium messaging app, WhatsApp. A new upgrade of the app allow users to have conversations with up to eight people.

With Messenger Rooms, Facebook users can host group calls of up to 50 people that anyone can join. Instead of inviting people individually, Facebook users can post links in their News Feed or in Groups or event pages. And unlike Messenger’s existing video chat features, participants don’t need to have the Messenger app or even a Facebook account to join a room. When a room is created, anyone can join via their browser, though hosts can opt to “lock” rooms to new guests to prevent party-crashers.

Just like what Facebook did to Snapchat, where it cloned its Stories feature for all its apps, it is almost duplicating Zoom’s features. Messenger Rooms will have “immersive 360-degree backgrounds that transport you to beautiful and iconic spaces, from the beach to a luxe apartment on the water,” along with “14 new camera filters that offer ambient lighting to brighten your space and your face.” Facebook also notes that there are no time limits for video chat sessions, which can be scheduled in advance. Zoom allows the first 45 minutes for free for users.

The update comes as Facebook says it’s seen a massive surge in calling across its chat apps, with more than 700 million people making calls on Messenger and WhatsApp every day. And on WhatsApp, Facebook is also increasing the number of people who can join a call, doubling it from four to eight. That update has since been launched.

But one of the biggest challenges to Zoom’s dominance comes from Google, the search engine giant. With the revamping of its Google Hangout as Google Meet, it seeks to challenge Zoom.

With a Gmail account, anyone can initiate a virtual conference with up to 100 users. This means that the over 1.6 billion Gmail users can potentially host conference right from their inbox.

Putting Meet front and center is Google’s latest attempt to go head-to-head with Zoom, the ubiquitous videoconferencing app that has so far ruled the stay-at-home era. Meet will have some privacy controls that Zoom has lacked (resulting in instances of “Zoombombing”). You can’t just click a link to join a Meet; you’ll have to log in to your Google account. If the meeting host (Meet host?) has not invited you, you’ll be sent to a waiting area until the host approves you. And unlike Zoom, the free version of Meet won’t have dial-in landline numbers for meetings.

Google and Microsoft are starting to catch up to Zoom in the videoconferencing space (although questions abound about how much Zoom actually has grown). Microsoft has grown its Teams app to 75 million daily active users, the company said last week during its earnings call. And Meet is adding about 3 million new users daily, according to Google, recently passing 100 million daily Meet meeting participants.

Analysts believe that the biggest threat to Zoom will come from Facebook. With over 2 billion active monthly users, Facebook would seek to do to Zoom what it has done to the likes of Snapchap and other apps which it either completely dominated or pushed out of the market.