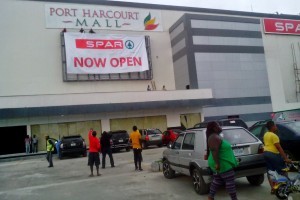 It was gathered that the explosion, which occurred in the evening, forced the management to close operation immediately.

It was learnt that many that had gone to the shopping Mall for relaxation to mark the celebration of June 12 Democracy Day were still at the centre when explosion went off.

A staff of the Spar, who pleaded anonymity, disclosed that the explosion happened in one of the kitchens.

The source disclosed that it was a gas cylinder that exploded, adding that five of the staff working in the kitchen sustained various degrees of injury.

The source also said it occurred at the continental cuisines kitchen, where Chinese and other continental dishes were prepared.

In a statement made available to The Nigerian Xpress, on Wednesday evening, Omoni stated that, “The Rivers State Police Command was today June 12, 2019 at about 5:50p.m greeted with the sad news of an explosion at the Kitchen Section of the Port Harcourt Mall (SPAR) where five persons sustained various degrees of burns.

“They are currently receiving medical attention at the Braithwaite Memorial Specialist Hospital (BMSH).

“Meanwhile normal business activities resumed shortly after the incident, as people went about doing their shopping.

“Investigation has been ordered by the Commissioner of Police with a view to ascertaining the cause of the incident.

“However, it is important to note that preliminary investigation conducted revealed that the explosion has no semblance of a terrorist attack nor an attack of any kind from outside.

“Further note that no life was lost as being speculated in some quarters. No cause for alarm as the Command is on top of matter”, Omoni stated.