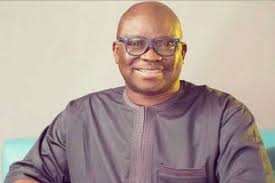 From Priscilla Ofunre, Ado-Ekiti
The Ekiti State All Progressives Congress (APC), has called on former Governor Ayodele Fayose to stop castigating the federal government over the deplorable state of Ado-Akure highway.
The party challenged Fayose  to explain the whereabouts of the N400 million alleged to have been earmarked for the reconstruction of the Ekiti portion of Ado-Akure road in 2014.
Fayose had last week condemned the federal government for abandoning the road, describing it as a death trap and beehive for criminals.
A statement on Sunday by the APC  Publicity Secretary, Hon Ade Ajayi,  quoted APC to have said in its  reaction to Fayose’s statement about the deplorable condition of the road that the former governor should be blamed for the poor state of the road.

READ ALSO:http://Gunmen attack, abduct train passengers in Kaduna
Ajayi expressed worries over the former Governor’s statement, challenging him to explain why the contractor handling the project was removed by him.
” The APC was shocked to hear that the former governor could describe the road as deplorable. He misappropriated the N400 million naira set aside for the reconstruction of the road during the first tenure of governor Kayode Fayemi’s administration and the project had started before he left in 2014 when he was defeated by Fayose.
“It was sad that Mr Fayose left almost all the state roads untouched and inflated the few road contracts and the flyover he constructed.
“Before 2018, all the roads across the state were full of potholes which the present administration under the able and hard working  Governor, Kayode Fayemi is busy fixing.”
Responding, Fayose said the issue that should dominate discourse  should be about the deplorable condition of Ado–Akure road and not unfounded allegation about a missing N400 million.
Fayose, in a statement by his Media Aide, Lere Olayinka said: ” It is a known fact that even Governor Fayemi himself can no longer ply the road with the level of security and the SUV that he uses”.
Fayose added further: “As per the allegation that somebody mismanaged funds, if they have any evidence that Ayo Fayose committed any financial infraction as governor, they should inform the EFCC chapter of their party.
“They are coming up with lies that somebody earmarked N400 million. If Fayemi earmarked N400 million, why didn’t he use the money to fix the road? He spent four years from 2010 to 2014, so for four years, all he could do was to earmark money.

“The dualised portion of Ado–Ikere road was rehabilitated by Fayose when he was governor. Fayose also extended the dualisation to Ikere Roundabout, if PDP was not robbed in the 2018 election, the arrangement was for that road to have been dualised to Amoye Grammar School, Ikere-Ekiti.
“By now, what have they done? Fayemi is running to two years in office now, what have they done? The roads are there, APC is in government in Ondo State, APC is in government in Ekiti State, they cannot put resources together and make the road useable,” he stated.