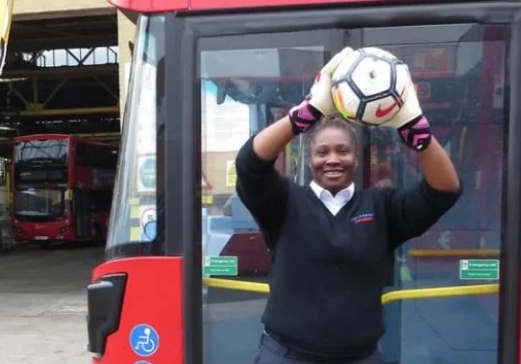 A former goalkeeper of the Nigerian women’s national football team, the Super Falcons, Rachael Aladi Ayegba, has turned into a bus driver in the United Kingdom.

According to reports, she now drives the Number 185 between Lewisham and Victoria, in the United Kingdom.

Ayegba told The Standard UK that “When you are trying to save the ball, you need safe hands. But there are ten others on your side.

“When you drive a bus, you are on your own.”

I’m not a Latecomer to Rivers politics, Chukwuemeka Eze…

Ayegba, whose favourite player is Cristiano Ronaldo, says she doesn’t play football anymore, though she has coaching licenses.

“I am old. You have to know when to stop.

“Mentally you have to be 100% ready, if you are a goalkeeper the defenders can help you. You can’t make any mistakes driving a bus.”