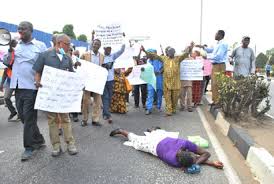 Former workers of Nigeria Airways Limited will on February 8 stage a mega rally in Lagos to declare their support for President Muhammadu Buhari’s candidacy in the February 16 presidential election.

The pensioners and ex-workers of the defunct national carrier made the announcement in a statement signed on their behalf by Mr. Lookman Animashaun and Mr. Sam Nzene, on Tuesday, in Lagos.

They said the pensioners were buoyed by the payment of N22.6 billion part-payment of their entitlements by the Buhari-led administration in October 2018.

According to the statement, another rally will take place on February 12

“Buhari is the man who has wiped away our tears after 14 years of neglect, humiliation and frustration by previous administration, which led to the death of over 800 of our members.

“The rally is designed to show appreciation to Mr President and his lieutenants, including the Minister of State for Aviation, Sen. Hadi Sirika, the Minister of Finance, Hajia Zainab Ahmed, who took the bull by the horns,” it said.

They added that Buhari had kept to his words by remembering the pensioners unlike former President Goodluck Jonathan who failed to intervene in their plights.

They expressed hope that the Buhari administration would in no distant time pay the balance of their entitlements.

The News Agency of Nigeria (NAN) reports that the former national carrier was liquidated in 2004 by the President Olusegun Obasanjo’s government without paying the workers their severance packages as stipulated in extant labour laws.

NAN reports further that the workers were paid a fraction of their entitlements by the late President Umaru Yar’Adua regime in 2008 before Buhari approved the part-payment of N22. 6 billion to them.

The current administration has also promised to pay them the outstanding as soon as funds are available. (NAN)