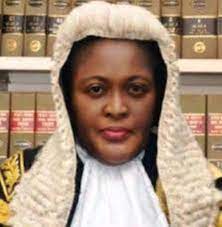 Former agitators in the Niger Delta have called on the Federal Government to investigate the recent siege to Justice Mary Peter-Odili’s Abuja house.

The militants urged the Federal Government not to sweep it under the carpet.

They also rejected claims that there were some incriminating items and illegal activities going on in Justice Odili’s Abuja residence that warranted the invasion.

But a statement signed by Convener of the Coalition of Niger Delta Militants, John Dukku, on Sunday, said the invasion  was as a ploy to intimidate, harass, humiliate and forcefully evict Justice Odili from her current position in the Supreme Court.

Justice Odili is the second most ranking justice of the Supreme Court after incumbent Chief Justice of Nigeria (CJN), Tanko Mohammed.

In the words of the former militants, “The coalition condemns in its entirety the recent invasion of Justice Mary Odili’s home in Abuja by agents of the Federal Government of Nigeria.

“We view this action as a ploy to intimidate, harass, humiliate and forcefully evict her from her current position in the Supreme Court of Nigeria.

“We can authoritatively say that the only offence of Justice Mary Odili is because she is the second highest ranking judge in the Supreme Court of Nigeria and she is from the Niger Delta region.

“The coalition rejects the claim by the government that suspicious activities were suspected in the building, this claim is baseless and unacceptable.”