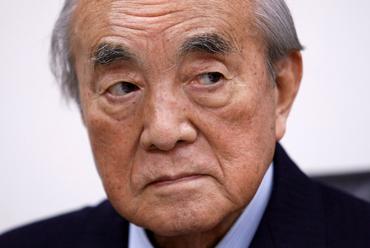 Former Japanese Prime Minister Yasuhiro Nakasone has died at the age of 101, NHK television said on Friday, after a career during which he hobnobbed on the world stage with Ronald Reagan, and battled with bureaucrats at home to enact sweeping reforms.

But while Nakasone, prime minister from 1982 to 1987, boosted Japan’s global profile, he failed to achieve his dream of revising the country’s pacifist, U.S.-drafted constitution to clarify the ambiguous status of the military and bolster its international role.

Nakasone, prime minister from 1982 to 1987, hobnobbed on the world stage with Reagan and Margaret Thatcher while battling with bureaucrats over domestic reforms.

He himself said he failed to achieve a dream of revising the country’s pacifist, post-war constitution to clarify the ambiguous status of the military.

“Revising the constitution takes time. I stressed to the public that it was necessary, but it was not possible to begin the revision quickly,” the straight-talking Nakasone told Reuters in an interview in January 2010.

Prime Minister Shinzo Abe has made loosening the limits of the U.S.-drafted constitution a key goal but revising the charter’s pacifist Article Nine remains contentious.

Known for his “Ron and Yasu” friendship with Reagan, Nakasone made headlines after taking office when he said that in event of a war, he would make Japan an unsinkable “aircraft carrier” for U.S. forces and bottle up the Soviet navy.

Nakasone also broke an unwritten rule on limiting the annual defense budget to 1 per cent of gross national product.

In 1983, he became the first Japanese premier to officially visit South Korea, mending fences with a country that Japan had brutally colonized from 1910 to 1945.

Nakasone, a former lieutenant in the Imperial Navy who lost his younger brother in World War Two, outraged Asian countries when he made an official visit to Tokyo’s Yasukuni shrine, where convicted war criminals are honored along with Japan’s war dead, on the 40th anniversary of Japan’s surrender.

He decided not to repeat the pilgrimage after it sparked riots in China.

Nakasone, like Abe, was a security hawk but did not adopt a revisionist view of Japan’s wartime legacy.

“The big difference is that Nakasone lived through” the war, said Andrew Horvat, a visiting professor at Josai International University. “He didn’t try to minimize the impact of the war … and was not insensitive to the feelings of neighboring countries.”

In a 1978 memoir, Nakasone recalled setting up a “comfort station” – a euphemism for a military brothel – on the island of Borneo during the war, although he later denied personal knowledge of the facility.

Abe, for his part, has stuck by a 1994 government apology to “comfort women”, but has denied there is direct evidence of widespread coercion by the military.

The issue remains a major source of friction in Tokyo’s relations with Seoul, since many of the women were Korean.

In 1986 he offended blacks, Puerto Ricans and Mexicans living in the United States by saying they brought the average intelligence level of Americans below that of Japan.

Nakasone won a rare fifth year in office after leading his Liberal Democratic Party to a landslide victory in 1986 elections. But his career was shadowed by links to a huge political scandal, a stocks-for-favors scam.

He quit the LDP in 1989 over the scandal but two years later was welcomed back as a senior adviser. He retired in 2003.

Born in the hilly district of Takasaki, northwest of Tokyo, on May 27, 1918, to a wealthy timber trader, Nakasone graduated from the Tokyo Imperial University, later the Tokyo University, before entering the Home Ministry in 1941.

He joined the Tokyo Police Department after Japan’s surrender in 1945. Nakasone has two daughters and a politician son, Hirofumi. (NAN)