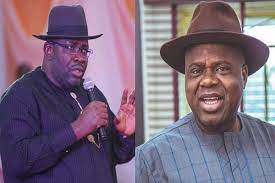 For the first time since he came on board as governor, Sen. Douye Diri has met with his predecessor in office, former Governor Seriake Dickson at an event organised by the People’s Democratic Party (PDP) caucus of the West Senatorial District in the state.

The event which took place in Sagbama headquarters of the senatorial district, on Saturday afternoon, and it witnessed the presence of Sen. Dickson and other top politicians of the district who were honoured by the party .

The former governor used the opportunity to explain why he had distanced himself from the administration which many see as his brain child.

His long silence and absence at important events of the new administration was rumoured as a love no lost relationship between the duo.

Besides several events, the most recent which former governor was conspicuously absence was the landing of  the first commercial flight in an airport that was his pet project, spoke volumes of his relationship with the incumbent governor .

However, Sen. Dickson used the event to calm the wild speculations off hiss suspicious actions.

Sen. Dickson, at the event , said he hds no rift with his successor, Governor Diri,  but he only distanced himself  from the activities of the administration to enable him operate without interference.

Further dispelling the rumours, Sen. Dickson explained that he, “deliberately maintained a distance from the incumbent administration as he desired to give his successor a respectable distance to operate,” and, however, stressed that he was “constantly in touch with Governor Diri, especially on issues bordering on the development of the state.”

Recalling the emergence of the PDP in the last gubernatorial election in the state, Sen. Dickson expressed delight how the PDP emerged victorious at the governorship election and expressed the optimism that the party would continue to win future elections in the  state as both  the former governor and the incumbent preached unity  among party  faithful for a better future.

Sen. Dickson, who lauded Governor Diri for his developmental strides in the state, said he was proud of his successor.

“Shun all forms of division and support the current administration. The PDP can only be strong when it is united,” Sen. Dickson  charged party members at the event as Governor Diri also spoke in the same vein,  urging  the people of Bayelsa West to close ranks in order to consolidate on the party’s achievements.

“Do not divide the house because you are yet to get appointment. This is one family and we would increase in number. We have been doing that and receiving defectors and returnees in their numbers.”

While describing PDP as the ‘party of choice’ for Bayelsans and would be difficult to beat in any election in the state , Governor Diri noted that the party was firmly rooted in the state and had embarked on projects that have endeared it to the people.

Appreciating the honour done him and other leaders of the district, Governor Diri further solicited their continuous support. He continued, “I join all of our leaders and in particular our leader, Senator Seriake Dickson, and all of us in Bayelsa West that you thought it wise to honour to thank you. I thank you from the bottom of my heart. What you have done is an honour and honour would also find you.

“There is nothing we can do to pay you back. Only God can repay you.

“By Gods grace, PDP is still the party to beat in Bayelsa State.  Today is not for campaign but it is a day for unity.

“Do not divide the house because you are yet to get appointment. This is one family and we would increase in number. We have been doing that and receiving defectors and returnees in their numbers.”

He also thanked the people of Bayelsa West for the honour done him and other leaders of the senatorial district and pledged to continue to serve his people diligently.

In his remarks, the deputy governor of the state, Sen. Lawrence Ewhrudjakpo,  also a beneficiary of the honour, thanked the people of the district also for the honour done him.

Highpoint of the event was the presentation of award of honour to Governor Diri, his deputy, Sen. Dickson and the Member representing Sagbama and Ekeremor in the House of Representatives, Dr. Fredrick Agbedi.