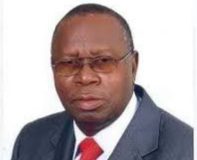 Dickson described Doukpola as a ‘rare gem’, a man of high integrity, an exemplary Bayelsan citizen of honour and great lover of the Ijaw nation.

The former governor said, in a statement, on Wednesday, that the late Chief Francis Doukpola lived a lifetime of dedicated commitment and service to God and man.

Chief Dickson said further that the late Political leader would be remembered for his wonderful services as a banker of repute to the good people of Rivers and Bayelsa.

He said that Chief Doukpola was a role model who was indeed a major pillar of support to him throughout his eight years as Governor of Bayelsa State.

He lamented that Bayelsa lost a dependable and humble leader who was readily available to provide stability in the state through rendering the needed guidance and support at all time as he did during his period as governor.

He said, “My family and I received the news of the death of our leader, Chief Francis Doukpola, with great shock and pain.

Bayelsa State and indeed the Ijaw nation have lost a great son, brother and leader who put years of dedicated commitment to the service of humanity.

“He was one elder and leader who was always present to give quality advice and was indeed a stabilizing force throughout my two tenures as Governor of Bayelsa State.

“As a man of proven integrity and accountability, I did not hesitate for one minute before entrusting sensitive responsibilities to him and he never failed.

“While we are pained, we should be consoled by the fact that he lived a great life worthy of emulation.

“I pray for the eternal repose of the soul of this great Ijaw son and for God to give his family the fortitude to bear this irreparable loss.”

COVID-19: Fumigation no precondition for reopening of worship centres in Kwara – Govt.