Euro 2020: UK under pressure to wave quarantine laws to stage final at Wembley 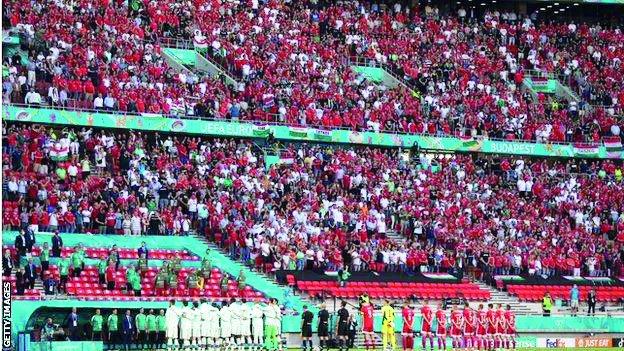 England may have to bend their Covid 19 quarantine laws if the final of Euro 2020 must be decided at the Wembley Stadium mid next month.
Europe’s football governing body, UEFA appears to be toying with the idea of taking the finals to the Puskas Arena in Budapest where there are no Covid restrictions.
Under England’s law, visitors to the country are required to self isolate for at least two days on arrival, a condition which is now counting against Wembley hosting the final of Euro 2020.
Prime Minister Boris Johnson may endorse a plan to exempt UEFA and Fifa officials, politicians, broadcasters and sponsors from having to self-isolate on arrival to stop the location change.
This may come despite concerns that such a decision may lead to a rise in Covid infections, and provoke a public backlash.
But Prime Minister Boris Johnson is said to be drawn to the plans on the condition that they would boost a joint Home Nations bid for the 2030 World Cup.
Related Posts

About 2,500 designated VIPs attending games at Wembley would not have to abide by quarantine restrictions on travellers under the plans, The Times reported.
Ministers are concerned, the paper reported, that if they do not relax the rules the semi-finals and final will be moved to Hungary.
It would be noted that Budapest’s Puskas Arena hosted a full capacity crowd of 61,000 spectators when Hungary took on defending champions Portugal in the opening match of Group F.
Wembley was at 25 per cent capacity for England’s opening victory against Croatia last Sunday.
Thanks to the rapid rollout of the vaccine programme in Hungary, the national football association has permitted a maximum attendance for matches at the Puskas Arena.
It’s estimated that around 5.3m people out of Hungary’s population of 9.8m had been vaccinated prior to Euro 2020 kick off after the prime minister, Viktor Orban, made use of vaccines available from Russia and China.
Orban, who claimed the vaccine will provide a “bulletproof vest”, loosened restrictions ahead of the Euros and anyone with proof of immunity can attend indoor meetings, eat inside at restaurants and visit the likes of theatres and cinemas.

Who will help tell PMB cattle-rearing is not a state enterprise?