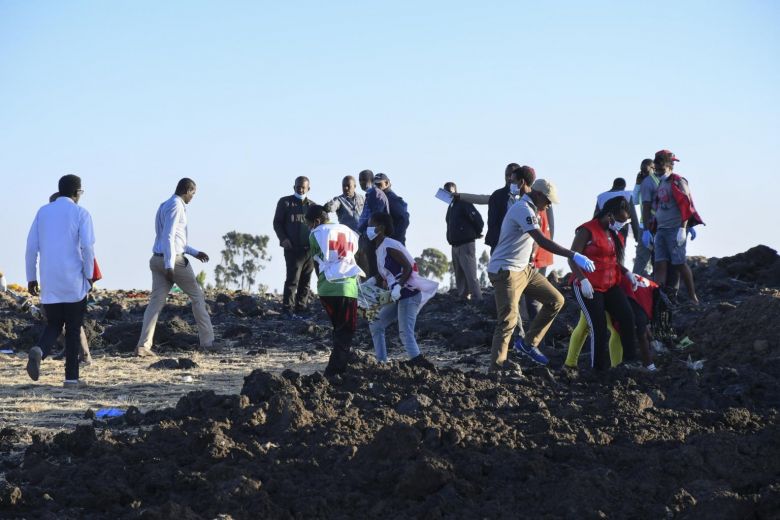 Families of those killed aboard Ethiopia Airlines flight 302 must wait at least five days to begin receiving some victims’ remains, the company said on Tuesday, though the identification of others is expected to take much longer.
The Boeing 737 MAX 8 plunged into a field minutes after take-off on Sunday from the Ethiopian capital of Addis Ababa, killing all 157 people aboard.
“The process of identifying the victims will take at least five days,” Ethiopian Airlines spokesman Asrat Begashaw told reporters in Addis Ababa on Tuesday.
“Families will be notified.”
Due to the impact and ensuing fire, the identification of some remains could take weeks or months and may need to be done via dental records or DNA, an industry expert told Reuters.
The process will be complicated because the passengers came from over 30 countries and Ethiopia has limited forensic capabilities, the expert added, asking not to be named.

Noordin Mohamed, a 27-year-old Kenyan businessman, said his family had no information about when they might be able to bury his brother and mother, who is a dual British-Kenyan citizen.
“We are Muslim and have to bury our deceased immediately. Now we cannot even recover any bodies.
“Losing a brother and mother in the same day and not having their bodies to bury is very painful,’’ he told Reuters in the Kenyan capital Nairobi.
Kebebew Legesse, the mother of Ethiopian Airlines cabin crew Ayantu Girmay mourns at the scene of the Ethiopian Airlines Flight ET 302 plane crash, near the town Bishoftu, near Addis Ababa, Ethiopia
Black box recorders recovered on Monday should help piece together the plane’s last moments.
Ethiopian Airlines’ Begashaw did not comment on where they would be investigated.
The plane had roared low over the field, spewing white smoke and debris, before swerving sharply and crashing, witnesses at the scene told Reuters.

A team from the Israeli volunteer rescue service ZAKA was expressing optimism to join the crash site on Tuesday and help identify bodies, said Opher Dach, consul of Israel’s embassy in Ethiopia.
China grounds Boeing 737 MAX jets after crash
The 737 line, which has flown for over 50 years, is the world’s best selling modern passenger aircraft.
The new MAX 8 variant, with bigger engines designed to use less fuel, entered service in 2017 and were intended to become the workhorses for airlines around the globe for decades.
But the Ethiopia disaster followed another crash involving the same model in Indonesia six months ago.
The Lion Air plane crashed into the sea shortly after take-off, killing 189 people.
By Tuesday, civil aviation authorities or airlines had grounded about 40 per cent of the world’s fleet of 737 MAX 8s. (NAN)