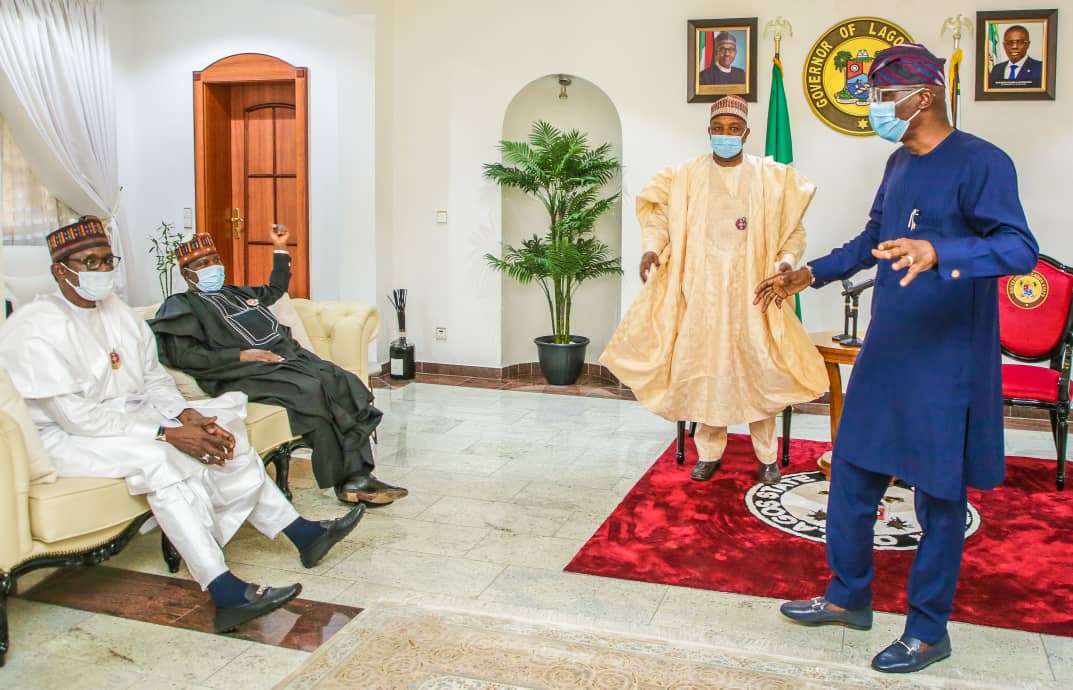 Governors under the aegis of the Progressives Governors Forum (PGF) on Tuesday visited Lagos State Governor, Mr. Babajide Sanwo-Olu, to commiserate with him and the people of Lagos State over the recent destruction of public and private properties in the State in the aftermath of the  youth protests.

Speaking to journalists after a closed door session with Governor Sanwo-Olu at the Lagos House, Marina, the chairman of the Progressives Governors Forum and Kebbi State Governor, Senator Atiku Bagudu, on behalf of All Progressives Congress (APC) governors commended Governor Sanwo-Olu for demonstrating leadership during the protests.

Governor Bagudu said the APC governors are committed to good governance and making life comfortable for youths in Nigeria. “We want our young men and women to have fulfilling jobs and opportunities both locally and internationally. But this will take continuous engagement and dialogue,” he said.

The PGF chairman said they decided to visit Governor Sanwo-Olu to encourage him and his team and to further show solidarity with the people of Lagos State. 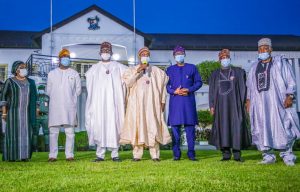 He said: “We come to encourage our colleague and his team and to further show solidarity with the people of Lagos that we are all in it together. This evening Governor Sanwo-Olu showed us some of the pictures of some of the devastating damages that were caused by the violence. And it is very clear that violence does not solve any problem; it compounds it.

“Today Lagos has further taken a loss because of that violence that has attacked everything; police stations, cultural institutions, two palaces and public facilities, loss of lives and other incidents. It is now very clear that the wise people of Lagos and all of us have known better that yes, our young persons have the right to express their feelings, we have to dialogue with them.  But also as ambassadors of the family at different respective families and parents, we also have to appreciate that we are in it all together. 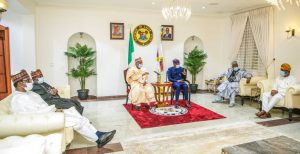 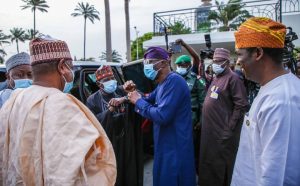 “You are not alone; we support them. We went to give them the support of a united strong country so that they can go into the world with pride. But they have seen how nobility of any course can be overtaken by those who otherwise have agendas that are contrary to what they thought they are out to achieve.

“So, I believe that there is a lesson for all of us and as a country, we need to do more quickly. We are doing well but this is a course that we must do more. In the last six years, Nigeria has had one of the most devastating slow down in the economic activities because of the combination of commodity prices collapse, which is further aggravated by the coronavirus pandemic in the country. But yet Nigeria’s response has led to a drop in the GDP by less than seven per cent, which is one of the best in Africa and indeed in the world.  There are countries where slowdown in the economy activity has been close to 40 per cent per quarter with unemployment.”

The Progressives Governors’ Forum also commended Governor Sanwo-Olu’s leadership in Lagos State during the protests. “We encourage our brother and commend him for the leadership he demonstrated visiting all the hospitals. He was with the youths; he presented their requests to Mr. President. He mobilised his team to respond as kindly, gently and energetically as possible. We must appreciate him.

“He has remained committed till date. The panel (Judicial Panel of Enquiry) he set up is making progress and they are independent. The truth is coming out gradually; it is evolving. So we encourage him. We appreciate the people of Lagos and we are glad that when we came in today, we saw economic activities, the resilience of Lagosians moving in. That is quite commendable and we believe that Lagos will get back its groove and mobilise the nation,” the governors said.

Peru names Francisco Sagasti as third president in a week