Elections: Our role starts, ends with provision of security – Army 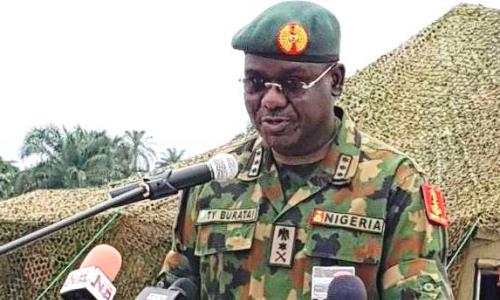 The Nigerian Army has restated that its role in the rescheduled general elections starts and ends with the provision of a secured environment for the exercise.

It said that none of its personnel would  be involved in political campaigns or escort Very Important Personalities on political missions.

The army’s  spokesman, Col. Sagir Musa, said this in a statement on Tuesday.

Musa said that the Nigerian army’s rules of engagement and code of conduct did not assign any political role to its personnel.

He was reacting to the alleged involvement of an officer in politics in Rivers.

The army spokesman described the insinuation as “baseless’’ and urged the public to disregard it.

He said the Chief of Army Staff, Lt.-Gen. Tukur Buratai,  had consistently charged officers and men to uphold  professionalism and  be guided by the rules of engagement and the constitution.

“Therefore, any insinuation or assertion against this open declaration is not only mischievous but politically motivated with the intent to tarnish the reputation of the army which has been built on discipline and obedience to civil authorities.

Members of the public are therefore urged to always ignore information attributed to the Nigerian army that is contrary to its core value of professionalism,’’ he said.

Meanwhile, the army has vowed to deal decisively with anyone planning to disrupt the rescheduled Presidential and National Assembly elections, no matter how highly placed.

The spokesman of the 6 Division, Port Harcourt, Col. Aminu Iliyasu,  gave the warning in a statement on Tuesday.

Iliyasu said that the Division had uncover credible intelligence of “an unholy plan by some political actors within its Area of Responsibility (AOR) to arm and sponsor miscreants.’’

Iliyasu also said  intelligence indicated that the political actors planned to use military-like fatigue dress for deception to cause pandemonium at polling stations for their political gain.

He, however, said efforts were ongoing to track the source of the weapons and agents involved, warning that anyone found culpable would be dealt with in accordance with the law. (NAN)