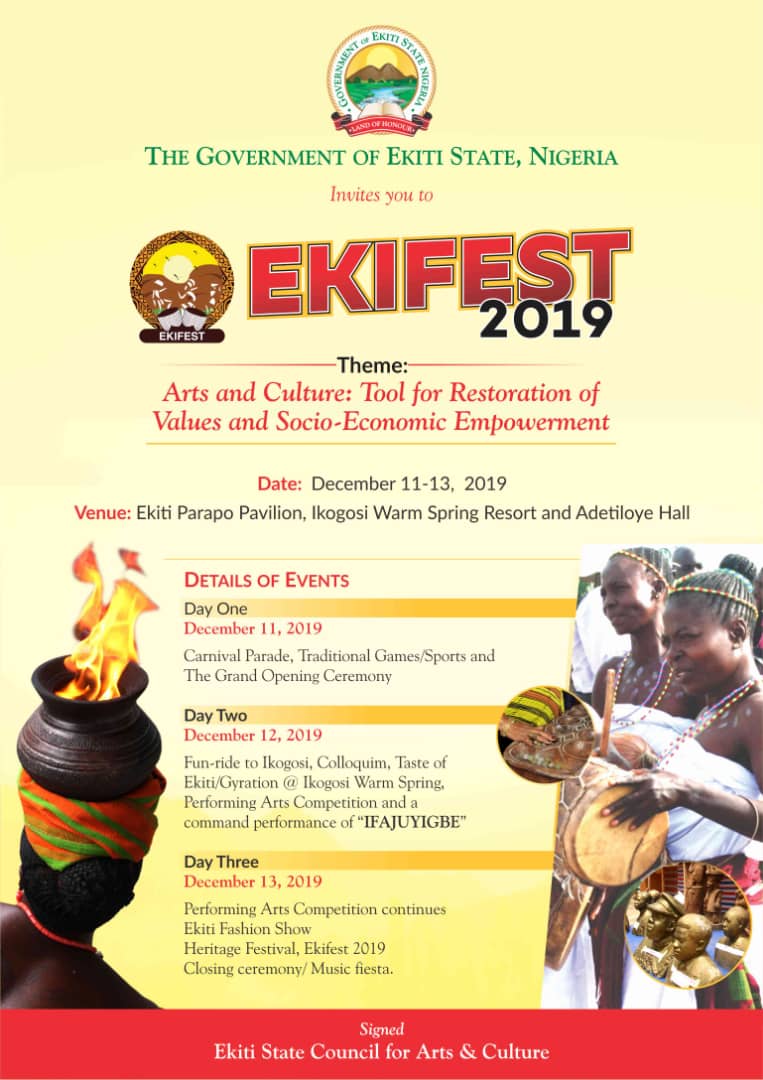 The Ekiti State Government has said that any African nation that fails to make strong investment in the area of arts, culture and tourism potentials will have to contend with hard-biting poverty.

Speaking on Sunday in Ado-Ekiti while unveiling the logo for the 2019 edition of the Ekiti State Cultural Festival (EKIFEST), the Director General, Ekiti State Council of Arts and Culture (ESCAC), Amb. Wale Ojo-Lanre stated that the government has developed a robust and modern arts, culture and tourism masterplan that can combat poverty in the state.

He said Governor Kayode Fayemi has been making huge investment in the sector to empower the youths through talent development and wooing of investors to make the state a destination of choice.

Ojo-Lanre said the EKIFEST cultural fiesta was not solely conceptualised to re-awaken the rich arts and culture of Ekiti people, but to as well inject money into the state’s economy, thereby improving the living standards of the people through job creation and strong investment drives.

He said about 15 respectable Nollywood actors will participate in the cultural event, which he said will open opportunity for mentorship for local and upcoming Ekiti based stars in the industry.

“Governor Fayemi has brought a new paradigm in arts, culture and tourism sector. They are not just for entertainment and leisure alone, they are to make huge economic gains on our citizens, individually and collectively. We are developing our talents and marketing them to the world through sponsorship.

“EKIFEST is not a mere jamboree or entertainment, it has been repackaged to showcase the culture of Ekiti people, hunt and promote talents, create employment for the teeming unemployed youths and generate revenue. Over 25,000 guests are expected to be in attendance.

“Arts and culture has become money, it is wrong to say it is barbaric or fetish to promote this sector. It is our identity as Africans and it has to be preserved and protected”, he said.

Ojo-Lanre stated that the festival, scheduled to hold between Tuesday, December 10 and December 13, will feature events such as Kiddies programmes, primarily designed to hunt and promote talents as well as instill in the youths the pristine values of Ekiti for economic sustainability.