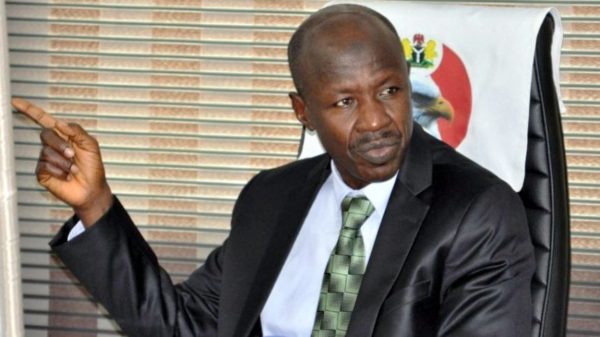 Acting Chairman of the Economic and Financial Crimes Commission (EFCC), Ibrahim Magu was, on Tuesday, March 3, honoured  with an Award of Excellence from the Federal Bureau of Investigations (FBI), for his unique role in the joint field operation with the FBI codenamed, “Operation Rewired” aimed at tackling the menace of cyber-crime.

The FBI legal attaché, Ahamdi Uche, who presented the award during a visit to the EFCC Headquarters, Jabi, in Abuja, commended Magu’s leadership as well as the Commission for the concerted efforts in the fight against corruption.

Magu, in the past had received several awards both from local and international organizations for his outstanding performance.

Ile-Arugbo: Saraki fails to convince Govt. for out of court settlement

May Almighty God give you long life and good health, Buhari prays for Obasanjo at 83