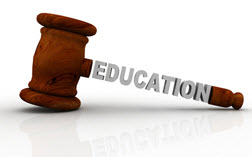 Some Lagos-based lawyers on Wednesday called for an overhaul of public schools in the country, to keep them in tune with international standards.

The lawyers, who expressed the viewpoint in separate interviews with the News Agency of Nigeria (NAN) in Lagos, said that the dwindling educational standard in public primary and secondary schools in the country should be redressed.

A Constitutional Lawyer, Mr Godwin Adelemoni of Beacon Solicitors, said that education, like some other sectors, had suffered neglect for many years.

According to him, a larger percentage of Nigerians attend public schools and so, there is the need for a thorough check and appraisal of their activities.

“To understand the impact of public schools, we must understand that overwhelming majority of Nigerians cannot afford private education for their children.

“So, for their children to get any hope of education, they must attend public schools.

“It, therefore, means that a poor standard of education in our public schools, means poor education for many Nigerians,” he said.

“To fix our public schools, we must first understand that our growth depends largely on an informed and enlightened population;

“If we must grow, we must invest heavily in education, “ Adelemoni said.

Ataene, a Social Critic, said that most successful people around the country today were products of public schools, including the professors in the universities.

He, however, said that the reverse had been the case today, as a major fall in the standard of education in public schools in Nigeria now exists, owing to several factors.

“The proliferation of private schools is partly responsible for this and more agonising is that public schools no longer have well-trained teachers.

“While some of the teachers can teach children how to speak English; some lack depth knowledge of other subjects,” he said.

On the way forward, Ataene said: “To be very frank, I think educational policy in public schools should be overhauled, to keep it in line with international standards.

“Government should equip, empower and retrain teachers in public schools, with a view to bridging the gap between the rich and poor, so that education can be accessed at little or nothing for quality,”

Ataene suggested adequate remuneration for teachers as a major motivator, calling for the scrapping of substandard private schools.

According to him, ignorance can be banished through a qualitative and tuition-free education.

Ologe also suggested the establishment of more public schools, construction of standard classrooms, massive supply of textbooks and equipment for the libraries.

A Rights Campaigner, Mr Malcolm Omirhibo of Malcom Omirhibo and Co, contrasted the present educational standard in public schools with the time past, when only qualified personnel were allowed to teach.

“There were so many beautiful public schools known for excellence in our days; and in those days, you must be well-qualified as a teacher to be employed in such public schools.

“We can get back our public schools to those good old times and government can ensure this, by putting the right structures and personnel in place,” he said. (NAN)