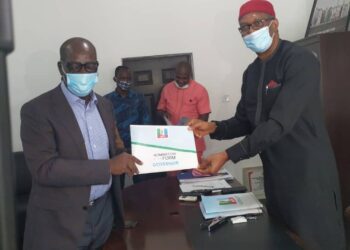 ….Asks Oshiomhole to recuse self from APC primaries

National Organising Secretary of the All Progressives Congress (APC), Emma Ibidiro, has received the expression of interest and nomination forms submitted by six Edo State governorship aspirants ahead of the June 22 primaries.

After submitting his form, on Wednesday,  Governor Obaseki cautioned the National Chairman of APC, Adams Oshiomhole, against meddling with the primaries and advised him to hands off.

“I call on Comrade Oshiomhole to recuse himself from the Edo nomination process because he is an interested party.

“It is against natural justice for a man to be a judge in his own case. So, I think the honourable thing to do is to recuse himself and let’s have a free process and let’s reconcile and build our party.

Reacting to allegations that he betrayed  Oshiomohle after he had helped him into office in 2016, Governor Obaseki described Oshiomhole as ‘a bigger betrayer’.

“We knew what we did to make him governor. I sacrificed eight years of my life to serve Edo State Pro-bono. I collected no Kobo to serve him in Edo.”

He also dismissed reports that he had obtained Peoples Democratic Party (PDP) nomination form, saying it was absurd.

According to him, “It is very absurd. I am someone that is very exposed. How can I collect a form from two parties when we have rulings in the past disqualifying people on that?

“I am a party man to the core. APC is my party because I come from a progressive political family. I believe in the ideals of APC.

“I believe in our President, I believe in what he stands for so I am a party man to the core. I am not an old-style politician. I represent a new direction of politics that is based on facts and truth, not lies.”

The other aspirants expressed different views about the election.

For instance, for Ogiemwonyi, a former minister, said the state needed “a governor who has empathy, love and could care for the people”.

However, the former Edo State House of Assembly Minority Leader, Iduoriyekemwe, who said he was in the race because the party denied the incumbent the right of first refusal, expressed his preference for indirect primaries.

COVID-19: NCoS issues guidelines as it reopens custodial centres for admission of inmates