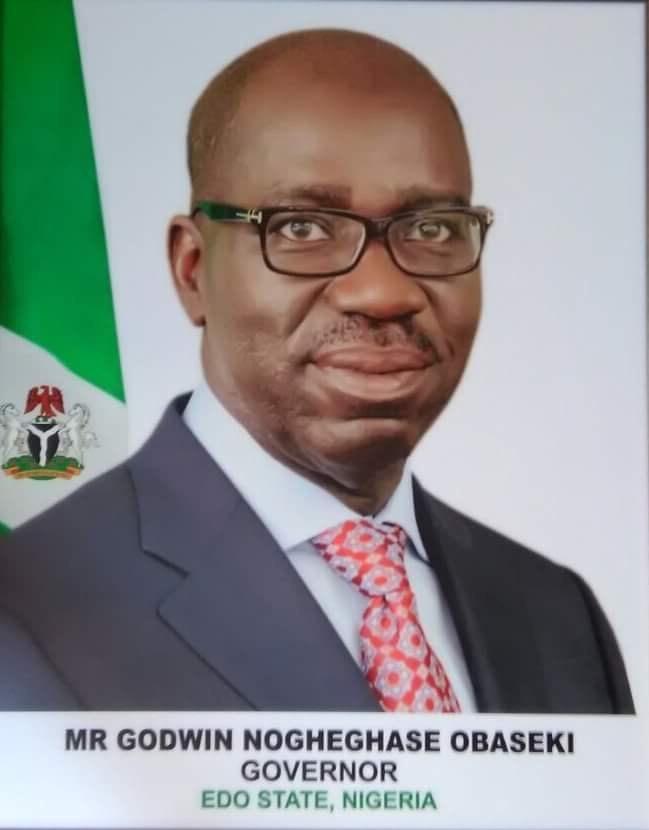 The cold war between Governor Godwin Obaseki of Edo State and his political godfather, Comrade Adams Oshiomhole, the National Chairman of the All Progressives Congress, APC, seems unabated. The war is multi-dimensional. First is the muscle flexing over the inauguration of the 7th state House of Assembly. There is also the second term ambition of the governor.

The much anticipated inauguration of the 24-member state House of Assembly took a new twist on Monday last week when nine lawmakers were whisked into the assembly complex at about 10.19pm and were sworn in by the Clerk, Alhaji Audu Yahaya Omogbai amidst tight security.

The swearing-in drama came few hours after 19 pro-Oshiomhole lawmakers, who claimed they were not invited for the inauguration protested the non proclamation of the Assembly by Governor Obaseki. Three of the lawmakers were allegedly lured via telephone calls to join the other six loyal to Obaseki for a meeting where they were coerced and driven to the Assembly for the inauguration.

After the hurried swearing-in, the lawmakers elected Frank Okiye, as Speaker and Yekini Idiaye, as Deputy Speaker. After the election of the two principal officers, Okiye adjourned sitting to July 17. He equally extended an olive branch to aggrieved members of the House to join the train in the interest of the state.

But there are insinuations that the worst is yet to come as the pro-Oshiomhole lawmakers, who were allegedly attacked on Tuesday while in a meeting in a hotel, may have perfected plot to opt for a parallel Assembly rather than pledging and shifting their loyalty from the national chairman of the party to Obaseki.

The Assembly complex is currently under the surveillance and watchful eyes of suspected party thugs in their large numbers, including combined team of security agents.

The leadership of APC in the state has been polarised along the Oshiomhole/Obaseki loyalists’ dichotomy over the 2020 second term bid of the governor.

At inauguration, the speakership position of the 6th Assembly was zoned to the Esan people in Edo Central Senatorial District since Oshiomhole, who was the immediate past governor of the state and his deputy, were from Edo North and South Senatorial Districts, respectively.

For the Esan people, the 7th Assembly offer another golden opportunity for the ruling APC to right the wrong and return the speakership position to the district, having been marginalised since the inception of the party in the state.

Edoroh had been a speaker of the Assembly. He was impeached over alleged misappropriation of fund. He was later suspended indefinitely by his successor, Kabiru Adjotor, for allegedly plotting to oust him, although that suspension was declared unconstitutional by the court. He is said to be the anointed candidate for the speakership by the Oshiomhole group.

Okoduwa is a third timer. It has been widely rumoured that the party leadership would have settled for him, as a child of necessity for the position should the warring Oshiomhole/Obaseki factions fail to reconcile their differences over who occupies the position.

Okiye is serving his third term in the assembly. He was a former majority leader, whose leadership qualities endeared him to the high and mighty across the political strata.

The hitherto smooth relationship between the governor and his godfather hit the rock when the former attempted to carve out a political structure for himself during the state party primary conducted by the Hajia Farida Suleiman-led National Working Committee.

Governor Obaseki had firm control of the last assembly. His attempt at producing the Speaker of the 7th Assembly had been seen as an Herculean task in view of the fact that 75 per cent of the lawmakers elected on the platform of APC owe their loyalty and allegiance to the national chairman.

But the in-fighting assumed worrisome dimension when at recent senatorial districts and local governments tours, the governor accused party leaders of fueling a non-existent crisis. He said that the party leaders were aggrieved, following his refusal to share public fund meant for development with them.

“Some individuals want us to put them first, which is against the party’s philosophy. In our party, we don’t share money or public fund but use it for the benefit of the people.

“I want to assure you that my party is solidly behind me. I am not standing on my own. So, ignore and forget what you are reading in a section of the media. Those are people who want me to give them the money I should be using to train our teachers, provide for our children and develop the state. I will never give our people’s money to them,” Obaseki said.

Penultimate week, and in what could be described, as reaction to the governor’s diatribe, some chieftains of the party under the platform of APC Rescue Team, vowed to take the party from the firm grip of the governor.

The party leaders expressed dissatisfaction with the governor’s technocratic style of governance, which they claimed undermined their position and role since assumption of office.

They accused Obaseki of demonising party members and killing their morale, making thousands of unfulfilled promises and allotting government assignments to foreigners, including masterminding suspension of party members.

Spokesperson for the group, Samson Osagie, a former member of the House of Representatives, said the group decided to take their destiny in their hands to rescue the party, having realised that they made the mistake of voting Obaseki into office.

“Our mission is to rescue our party and state from the governor and we will not shy from doing so. Since we agreed that we made a mistake the first time, the time to correct that mistake is now.

“Obviously without asking for answers, no responsible organisation like our party will allow a man so described to destroy its future chances and those of its members,” Osagie said.

Indeed, the once cohesive ruling party is on the verge of disintegration, as the state has been thrown into daily scene of protest and counter protest for and against Obaseki’s second term bid.

In the last three weeks, the streets of Benin, the state capital, have been witnessing series of solidarity protests from various interest groups, including members of the National Union of Road Transport Workers, NURTW, market women, pensioners, the Nigeria Labour Congress, NLC, in support of Governor Obaseki’s second term bid

State Chairman of NURTW, Mr. Odion Olaye, while declaring the group’s support for the governor said: “Obaseki is working and we are here to commend him, especially in the area of road construction and renovation because we as road users are direct beneficiaries of his road projects, and we want him to continue the good work.”

The feud is already taking a dangerous dimension with allegation by a member of the state House of Assembly, representing Oredo East, Chris Okeaben, that his life was being threatened because of his unflinching loyalty to Oshiomhole.

“I will not regret my loyalty to the APC National Chairman, Comrade Adams Oshiomhole. Those telling lies to Governor Obaseki are doing so in pretence that they want to launch second term campaign bid for him. The only way they can make so much money from the governor is to tell him to stay away from the APC national chairman so that they can make so much money from him to buy more properties in Dubai,” he said.

Indication that the crisis may persist came to the fore when a group, Coalition for Progress, joined the fray and called for the resignation of the national chairman.

Spokesperson for the group, Dr. Peter Ologun, accused Oshiomhole of promoting nepotism in the state politics.

He said: “If Oshiomhole refuses to toe the path of honour by tendering his resignation letter, Edo APC members would be left with no option but to stage a one million-man march in Abuja to peacefully enforce his removal from office.”

However, the  Aslem Ojiezua-led APC state executive has distanced itself from the group. The state Publicity Secretary, Mr. Chris Azebamwen, said the group cannot speak on behalf of the party.

“All registered and card carrying members of APC are stakeholders and there are no splinter groups within APC in Edo State,” he said.

As the rift between the duo goes on unabated, there are permutations that Obaseki would at the long last either be compelled to bow to the superior political power of the national chairman, who still has firm control of the party structure or seek alternative platform to actualise his second term bid.

Unfortunately for the governor, Oshiomhole is waxing stronger in the party. The National Working Committee has not only issued a clean bill of health to him, the 36 states party chairmen have also reposed their implicit confidence in his leadership.

But for now, the governor may be having upper hand with the inauguration of the state House of Assembly and the election of its speaker, who is his loyalist.

Whether the inauguration will survive the murky and muddy waters of the state politics will be determined by events in the next few weeks.

But, the governor is gloating over the success. He has congratulated Okiye and Idiaye, saying with the inauguration of the Assembly and their election, the state is set for the lawmakers to commence legislative activities and perform their responsibilities to engender development across the state.

He said: “I congratulate the 7th Assembly on their inauguration and the election of Rt. Hon. Frank Okiye, as Speaker and Hon. Yekini Idiaye, as Deputy Speaker. Their emergence, I am sure, will pave way for more development in the state.

“We are ready to work with the newly inaugurated Assembly in deepening progressive ideals in the state, ensuring that there is a close synergy to see to the delivery of policies, programmes and initiatives targeted at repositioning the state, as an economic powerhouse in the country.

“As we continue to provide tech-driven, people-centric governance in Edo State, there is no denying that the new leadership of the House, will key into our overall objective of rearticulating Edo State for prosperity and economic growth. I congratulate the newly inaugurated Assembly, and wish the newly sworn-in members a fruitful four years of impactful legislative activities.”

The leadership of the state chapter of APC has also said it is fully in support of the emergence of the new leaders.

The party said it is confident that the House would uphold the ideals of the APC while discharging their legislative duties.

“The leadership of the Edo State Chapter of the APC heartily congratulates the Edo State House of Assembly on the peaceful inauguration and election of its Speaker, Rt. Hon. Frank Okiye, and Deputy Speaker, Hon. Yekini Idiaye, at the first session of the 7th Assembly.

“The Edo State chapter of the APC is convinced that the leadership of the 7th Assembly will uphold the ideals of the party and consolidate on the achievements of the 6th State House of Assembly.

“There is no denying that the executive arm of government will benefit from the inputs of a supportive, vibrant and stable House of Assembly. This is more so as the party occupies all the 24 seats in the House.

“The new leadership is a product of party supremacy and we are certain that they will collaborate with the executive and judicial arms of government to consolidate on the policies, programmes and initiatives of the state government, which aligns with the vision of the party,” Ojezua said.