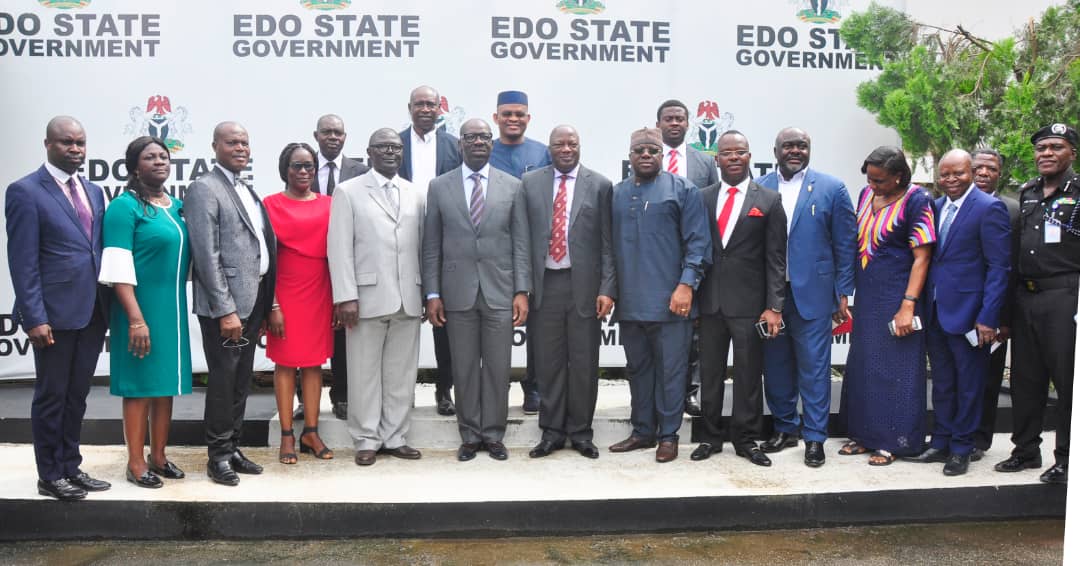 The Governor of Edo State, Mr. Godwin Obaseki on Wednesday in Benin City, Edo State inaugurated the Local Organising Committee (LOC) of the 2020 National Sports Festival.
Edo State was handed in December 2018 hosting rights to the 2020 games by the Federal Ministry of Sports. The Festival will hold from March 20 to April 20 2020. The Main Organising Committee for the games was inaugurated in April.
The Edo 2020 LOC inaugurated by Governor Obaseki has Hon. Phillip Shaibu, the Deputy Governor of the state as Chairman and Dr. Emmanuel Igbinosa, a retired Director in the Federal Ministry of Sports as Secretary. Hon. Shaibu who was absent at the inauguration, was represented by Mr. Godwin Dudu-Orumen, who is also a member of the LOC.
Governor Obaseki urged members of the committee to package the games attractively in order to get sponsors on board.
The Governor said with a total of about 15,000 athletes and officials expected to be in attendance, the festival was big enough to attract sponsorship from the private sector.
“We are appealing to private corporations within and outside the country to leverage on the game for the promotion of their goods and services.
“This is also as a way of promoting their social corporate responsibility of giving back to the society,” he said.
He said the sports festival would engender a strong platform for engaging the youth in Edo, expand the economy of the state, fast-track infrastructural development while promoting sports adding that it would also put Edo State in the pole position of the favourite tourism destination in Nigeria.
The Governor charged the members of the LOC to give the job their best shot noting that they had been selected for the job based on their integrity and experience.
Responding to the Governor’s admonition, the Edo State Sports Commission Chairman, Godwin Dudu-Orumen, who spoke on behalf of the chairman of the Committee, said members were primed to do their best noting that they were quite mindful of the enormity of the responsibility thrust upon them by the government and people of Edo State.
In addition to the Deputy Governor, the Chairman of the Edo State Sports Commission, other members of the LOC include, Tony Akiotu, Group Managing Director of Daar Communications Plc, Dr. Erimona Edorodion, Hon. Commissioner for Physical Planning and Urban Development, Mr. Mike Itemuagbor, Chairman PADMOZI Sports Marketing Limited, Sabina Chikere SSA on Sports, Office of the Deputy Governor, Mrs. Edugie Agbolanhor MD Edo City Transport Service (ECTS) ; Faith Irabor, Director of Sports, Office of the Deputy Governor, Sunny Airende, Director of Sports; Edo State Sports Commission, ACP Tunde Sunmonu, Hon Damian Lawani, Hon. Commissioner for Youths, Osaze Osemwegie – Ero, Hon. Commissioner for Arts, Culture and Diasporal Affairs, John Osagie Inegbedion, Hon. Commissioner for Infrastructure, Henry Nzekwu and Yusuf Ali.

FIFA U-20 Women’s World Cup: We are ready to host the world -Udom Emmanuel