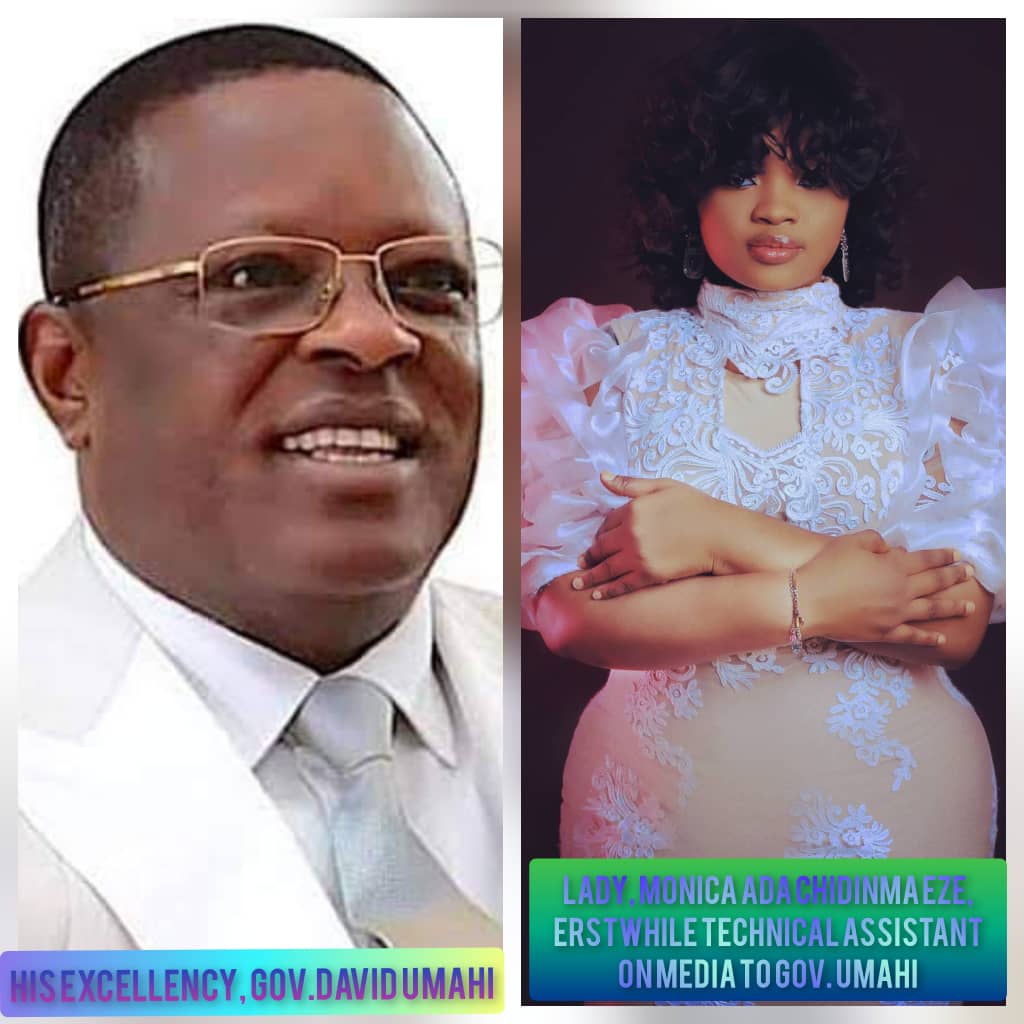 …Describes Gov. Umahi as a ‘Catalyst, Creator of Modern Ebonyi’

.Recommends Umahi for a Higher Position in the Politics of Nigeria

Erstwhile Technical Assistant on Media to Governor David Nweze Umahi (FNATE, FNSE) the Executive Governor of Ebonyi State and Chairman of the South East Governors Forum, Lady Monica Chidinma Eze has described the current dispensation in the life of Ebonyi State and her people as a period of triple celebrations.

According to Monica who is the President/Founder of David Umahi Nweze Akubaraoha Ebonyi Transformation Agenda (DUNAETA) a vibrant, virile grassroots NGO whose inputs and mobilization towards enthronement of genuine democracy in Ebonyi State are in the open and acknowledged widely both within and outside Nigeria highlighted that by every October 1st, Nigerians roll out drums to celebrate the country’s independence from the British colonialists. In Ebonyi State, October 1st, provides her own celebration as the state was equally created on the same day. Thus as the country marks its 61sf birthday, Ebonyi also celebrates 25 years (SILVER JUNILEE) of its creation.

This year’s celebration of both the Nigeria’s 61st Independence Day anniversary and Silver Jubilee celebration of the creation of Ebonyi State is a bit unique and different as Governor Umahi is duly acknowledged all over the world as an enigma, outstanding Administrator, visionary, emancipator and the Governor stationed by God to change the fortunes of Ebonyi positively and the entire South East as the the David of our time.

Ebonyi State Has Come Of Age

She opined that Ebonyi State at the age of 25 not minding the state of her creation and backwardness in the past has come of age to take its rightful position among the comity of States in Nigeria courtesy of the remarkable impacts and innovative leadership that the current Governor have brought to bear on the leadership of the State.

Ebonyi and all Ebonyians are truly in festive spirit as apart from the celebration of the 61st independence anniversary of Nigeria and the 25th anniversary of the creation of Ebonyi State, Ebonyians are also celebrating the remarkable feats of Governor Umahi within the past six years in areas of healthcare, education, security, initiating one of the best Airports in Nigeria, agriculture, maintenance and dualization of Federal Roads particularly the Abakaliki to Enugu and Abakaliki to Afikpo Express Roads,  Construction of the Biggest State Shopping Mall in Nigeria,  prompt payment of salaries to civil servants and pension to pensioners, plans to  employ of over 5,000 civil servants while many other states are plotting on how to sack most of their workers, infrastructural revolution which are visible even to the blind. “Ebonyi is truly blessed with an enigma and innovative leader as her Governor that one can easily postulate that the modernisation of Ebonyi State have been achieved in our life time through Apostle Dr. David Nweze Umahi.

Ebonyi State before the Coming of Umahi and His Impact

Ebonyi State in the eyes of the world was a State infested and known for the menace of the deadly Guinea-worms and water borne diseases with a Local Government Secretariat as its Government House but since the coming of Governor Umahi all these negative thoughts about Ebonyi State has become a thing of the past, “those who have visited Ebonyi State before the coming of this Infrastructural Bulldozer cannot know the State if they visit the State now as the changes in the State is even more visible to the blind. Apart from the approval of the request by the administration of Governor Dave Nweze Umahi of Ebonyi State to construct an International Airport by the Federal Government at a time when the need to boast the economy of the State and region becomes imperative” Monica averred.

She stated that, “It is on record that Governor Umahi is the first Governor from Ebonyi State to embark upon construction of over fifteen gigantic flyovers in the State with ten completed while five are in the process of completion. To make the State a truly modern State, Governor Umahi has started the construction of the first Olympiad size Stadium and the Ebonyi Ring Road linking almost all the Local Government Headquarters of the State. The construction of one of the best Government Houses in Nigeria is completed and ready for commissioning.

The Ecumenical Centre initiated and completed by Umahi’s administration stands out as one of the best places of worship in the entire West African countries.  One of the best International Markets and motor park in the entire Nigeria are completed coupled with the electrification of all the Local Government Headquarters of the State including major towns in the State. All the major roads to major towns and Local Government Headquarters are all being constructed.

The Water-Scheme in the State is being developed to supply water to all areas of the State coupled with all other major developments that has placed the State as the most developing economy in Nigeria. All these feats to make Ebonyi State one of the most developed States in Nigeria, Dr. Umahi scored another first amongst all the Governors that have governed Ebonyi State to become the South-South Vice-Chairman of the Governors’ Forum and Head the South East Governors Forum.

Lady Monica Eze AKA Ada Ebonyi further stated that if what makes a State modern are the provisions of quality and drinkable water scheme, good roads, electricity, quality infrastructural facilities then one can conclude without fear of contradiction that with all that Gov. Umahi has achieved within the span of six years, he is truly the catalyst and Creator of modern Ebonyi State. She congratulated Governor Umahi and the entire Ebonyians on this occasion of the celebration of both the independence of Nigeria and creation of Ebonyi State and most importantly the speedily development of the State.

Special commendation and thanks must also go to late Head of State, General Sank Abachi for his foresight in creating Ebonyi State 25 years ago.

Umahi’s zeal to transform Ebonyi was born out of the experience he gathered as both former Chairman of PDP in the state and Deputy Governor. His policy trust on the industrialization was key, which he began with the construction of three industrial clusters across the three senatorial zones aimed at developing each sector. These include agriculture, technology and human empowerments. As an Engineer, he engaged new technology in constructions with particular reference to roads where 8 inches concrete roads started springing up in the state. Parks, markets and streets started wearing new looks. Pedestrian crossing, flyovers, street lights, water fountains were also built to change the face of Ebonyi, transforming it to one of the fastest growing economies in Nigeria.

Empowerment for youths and widows has taken a new shape in the state, positively impacting lives of many.  Today, many youths who were mere street urchins have become employers of labour through the rich empowerment programmes of the Umahi administration.

Reactions on the Feats of Governor Umahi

Reacting to some of the great feats of Governor Umahi within this past five years, Lady Comfort Obi, the Publisher of the Source Magazine and a very powerful Pen Pusher in Nigeria highlighted in one of her treatises, “In fairness to Umahi, he has so far, done well as Ebonyi Governor. He has encouraged Agriculture, especially, in the area of rice production. Ebonyi rice ranks amongst the best in the country. I don’t know much about what he did in the area of yam production, but I proudly ask for Abakailiki yams from my yam customer. But where Umahi has definitely excelled most is in the provision of Physical Infrastructure, especially roads. Aside from Anambra State where Peter Obi excelled in the construction of roads, no other governor in the south-east compares to Umahi in that area.

Gradually, Umahi has bequeathed Ebonyi with quality roads. Umahi has also excelled in the area of education, granting scholarships to hundreds of Ebonyians in relevant areas of study. Thanks to him, Abakailiki, which, as the state capital looked worse than a local government headquarters, has had a complete turn- around. It looks bam”

With all these feats, I can proudly state as Ada Ebonyi that if the access to power is based on the feats and capability of leaders to turn a seemingly dark age to a very bright future that Engr. Dave Nweze Umahi is now fully prepared for a higher position in the politics of Nigeria.

“I am glad to note that my view tallies with the prediction of an American, Dr Paul Owen from the city of California who squealed in delight after watching a video clip in my YouTube channel displaying the silent but very salient revolution that Dr. David Nweze Umahi is igniting in Ebonyi State and could not help but postulated thus: “Umahi deserves to be the President of Nigeria come 2023 but sadly most Nigerians are blind“.

While I differ from Owen’s view about most Nigerians being blind as captured above, I must agree with his submission that Umahi is now well prepared to take Nigeria out of the woods and her present economic and political challenges.

These and many more underscores the basis on which one of the prominent sons of South East, Chief Arthur Eze once advised President Muhammad Buhari, ”to look no further than the Ebonyi State Governor for a Nigerian President of the Igbo extraction if, and when the time comes. Apostle Dave Nweze Umahi, the wisest Governor in Nigeria has come of age and it is time for Nigeria to move forward with him”. All these feats to make Ebonyi State one of the most developed States in Nigeria are the initiatives of Apostle Umahi, divinely inspired to lead the state on the path of progress and reposition her to that highly anticipated enviable height

Governor Umahi is a magician, an enigma, poster boy and Revelation of this dispensation and your visit to Ebonyi will convince you.

Umahi’s Presidency becomes imperative particularly now that based on equity and spirit of fairness all Nigerians are of the view that the next President must come from the Igbo extraction.

With all these feats, I can happily and proudly state that Governor Umahi is the David of Ebonyi, the wisest Governor in Nigeria according to Governor Ikepazu of Abia State, this Zik Awardee for Leadership is due for a higher position in Nigeria as demonstrated his commitment to making EBONYI State one of the fastest-growing economies in Nigeria today.

Finally, I happily congratulate Governor Umahi and the entire Ebonyians on this occasion of the celebration of Nigeria’s Independence, the creation of Ebonyi State and most importantly the accelerated development of Ebonyi State, under the visionary, people oriented leadership of Governor David Nweze Umahi.