Drama in Rivers as LG chair resumes work under the tree 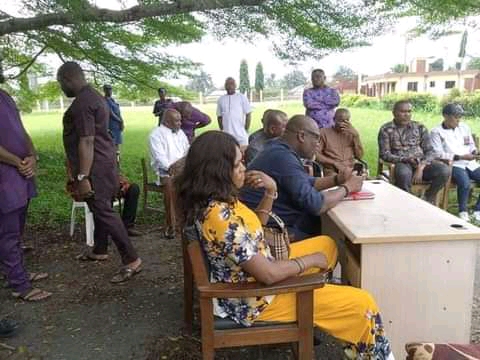 There was a mild drama in Rivers State, on Tuesday, as the newly-inaugurated Chairman of Emohua Local Government Area of the state, Dr. Chidi Lloyd, resumed under a tree within the premises of the Council on his first day of office.

Dr. Lloyd was a former chieftain of All Progressives Congress (APC), Director-General of Buhari/Osinbajo APC Campaign Committee in 2019 before defecting to the Peoples Democratic Democratic (PDP), the platform on which he contested the last local government election.

He was also a former leader of Rivers State House of Assembly.

According to reports, Lloyd opted for the open space after complaining that the office of the immediate his immediate predecessor, Tom Aliezi, was too filthy and unkempt.

Lloyd also addressed the staff of the council under the tree on Monday alongside his deputy.

Some people believed that Dr. Lloyd’s action might be a publicity stunt to attract attention.

However, the picture of the new chairman carrying out his official duties under a tree caused social media buzz when it surfaced on the internet.

Many, however, said that the chairman’s action was targeted at portraying the immediate past administration of Tom Aliezi as lacking in sanitation etiquette.

It was also gathered that Lloyd described the sanitary condition of the Council Headquarters as “shameful and regrettable.”

Lloyd who holds PhD in Law and was a Lecturer in the Faculty of Law, University of Nsukka, has vowed to tackle insecurity and illegal oil bunkering in the Local Government Area.