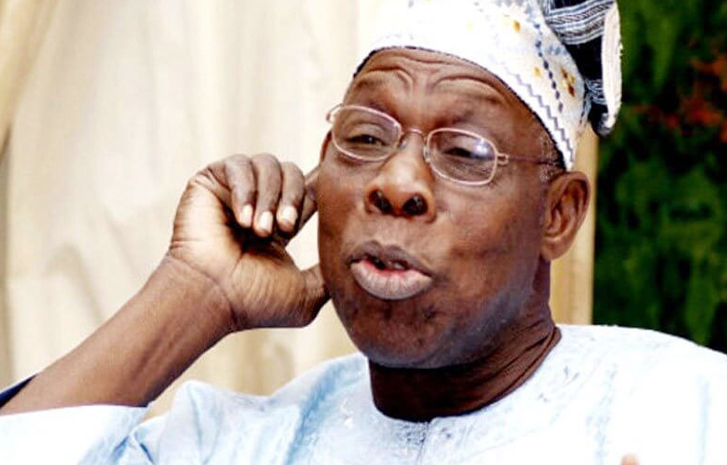 Former President Olusegun Obasanjo, on Wednesday, called on the Federal Government to stop payment of ransom to kidnappers and bandits.

He believed that practice only escalates the problem of insecurity in the country.

Obasanjo spoke while hosting members of the Tiv Professionals Group (TPG) led by Prof. Zacharys Anger Gundu who visited him at his Pent House residence located within the Olusegun Obasanjo Presidential Library (OOPL), in Abeokuta, the Ogun State capital.

The former president urged the Federal Government to evolve a more effective means of tackling insecurity, particularly the menace of kidnapping and other banditry currently ravaging the country rather than paying ransom to the bandits.

Obasanjo specifically advocated for a, ‘carrot and heavy stick’ approach to fighting insecurity in Nigeria to a standstill, maintaining that paying ransom to kidnappers and bandits further go a long way at encouraging banditry to flourish.

He also declared that those beating drums of division in Nigeria never meant well about the interest of the minority ethnic groups in the country.

Obasanjo told his guests that leaders across all divides in the country must ensure the 2023 general election birthed the emergence of a new federation in Nigeria failure of which, he said, the country could be “sliding into ground dissolution”.

Obasanjo, who bemoaned security challenges currently facing the country, said he did not believe in payment of ransom to kidnappers and banditry as it encouraged criminals indulging in the act.

He specifically noted that President Muhammadu Buhari’s government and that of his predecessor, Dr. Goodluck Jonathan had paid ransom to kidnappers and bandits, but denied it.

The former president, however, insisted that the 2023 general election must mark a watershed for Nigeria.

He continued, “I do believe that whatever else we do we have to make the year 2023 a watershed for Nigeria.

“The year 2023 should give us the beginning of emergence of a new federation or feeling that the rot continues and then, we are going to be sliding back to ground dissolution. God forbid.

“Some people are still reaching out, and hoping that lives can still be saved. But a situation whereby anybody thinks paying ransom is the way out, that person is folly. He is a folly.

“Government has always paid ransom. Not only this government, even during Jonathan (administration), they paid ransom, but they denied it.

Presenting a paper earlier, leader of the group, Prof. Zacharys Anger Gundu told Obasanjo that, “blood is flowing in Benue State” following killings of the people allegedly by suspected Fulani herdsmen and bandits.

He said people were being maimed in their sleep and on their ancestral land, calling on Obasanjo and other influential Nigerians to rise to the occasion to stem the tide of killings.

While alleging skewed security architecture in the country, Gundu said, “Nigeria seems to be losing the battle against insecurity.”

He, however, demanded that full compensation for the victims of killings and destruction in Tivland, proscription of armed Fulani groups, while “land grabbing must stop and all occupied lands must be vacated.”

Gundu also called for intensified advocacy against nomadic pastoralism and hosting “all Nationalities Summit” where issues would be discussed with a view to finding lasting solutions.

“There are different shades of instability in the country. Nigeria is truly bleeding to death. There’s even a population fault-line which could lead to the ‘Lebanon Trap’

“All Patriots must stand together; but if others have to be enslaved before the country can survive, we will prefer, as Tiv people, to take our destiny in our hands.”