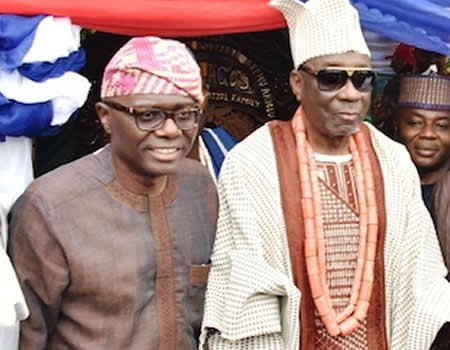 Akiolu gave the advice at a Sanwo-Olu had with the state Council of Obas at the Lagos House, Alausa.

Also in attendance at the meeting was the Deputy Governor, Dr Obafemi Hamzat.

The monarch said that many of those who would throng Sanwo-Olu’s office with advice were hypocrites mainly concerned with what benefits them, and not for the general public.

Akiolu said attending the meeting became necessary because all those elected and given leadership positions must be respected by all, including monarchs.

In an interview with newsmen shortly after the meeting, the monarch said it was used to discuss germane issues on security and socio-economic development of the state.

Akiolu said the visit was to felicitate with the governor on his success at the polls and bring greetings from the kingdoms the traditional rulers administer.

He promised that the monarchs and their chiefs would work with the governor to ensure that his administration records tremendous achievements, especially as it concerns security.

Akiolu, who spoke in Yoruba, also debunked claims that he was a puppet to some bigwigs in the country.

He said that he feared no one except God, and would always speak my mind, aside speaking truth to power.

Sanwo-Olu thanked the traditional rulers for the visit and promised to foster a working relationship with the traditional institutions for the state to be safe and be a destination of choice for investors. (NAN)

AFCON: Nigeria to play Algeria in Semi-final on Sunday