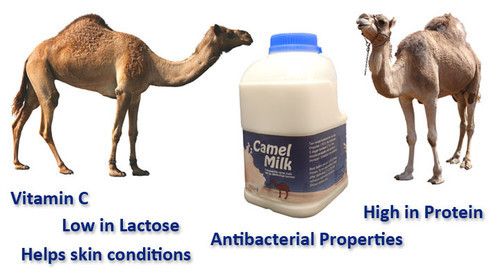 Okoh told the News Agency of Nigeria (NAN), on Friday in Abuja, that camel milk had great nutrition that could also benefit babies.

“If you have cow milk allergy or intolerance, camel milk is a great option since it lacks the A1 casein protein and lactoglobulin, found in cow milk,” he said.

The Dietitian said that Camel milk was a natural pro biotic that was 50 per cent lower in regular and saturated fat than cow milk.

“It has 110 calories per serving, and five grams of protein, which makes up 10 per cent of the suggested daily intake of protein,” he explained.

He also noted that camel milk was packed with a handful of nutrients such as potassium, calcium, folate, phosphorus, thiamin, zinc and selenium.

According to Okoh, the composition of camel milk makes it closest to human milk compared to other animals, making it the safest feed for babies and children.

Okoh further explained that camel milk had enough nutrients to sustain a person through the day, adding that it could be used to treat malnourished children.

He also said camel milk with its high composition of monounsaturated fat, was recommended as safe for the heart and blood.

“It also contains A2 beta casein, which is different from A1 casein, found in most dairy milk. The A2 beta casein may be responsible for protective effects on the heart and immune system,” he said.

According to him, camel milk treats, prevents, and controls diabetes.

NAN reports that Camel milk has supported Bedouins, nomads and pastoral cultures since the domestication of camels years ago.

Herders have been known to survive solely on the milk when taking the camels on long distance journeys through the desert and arid areas. (NAN)