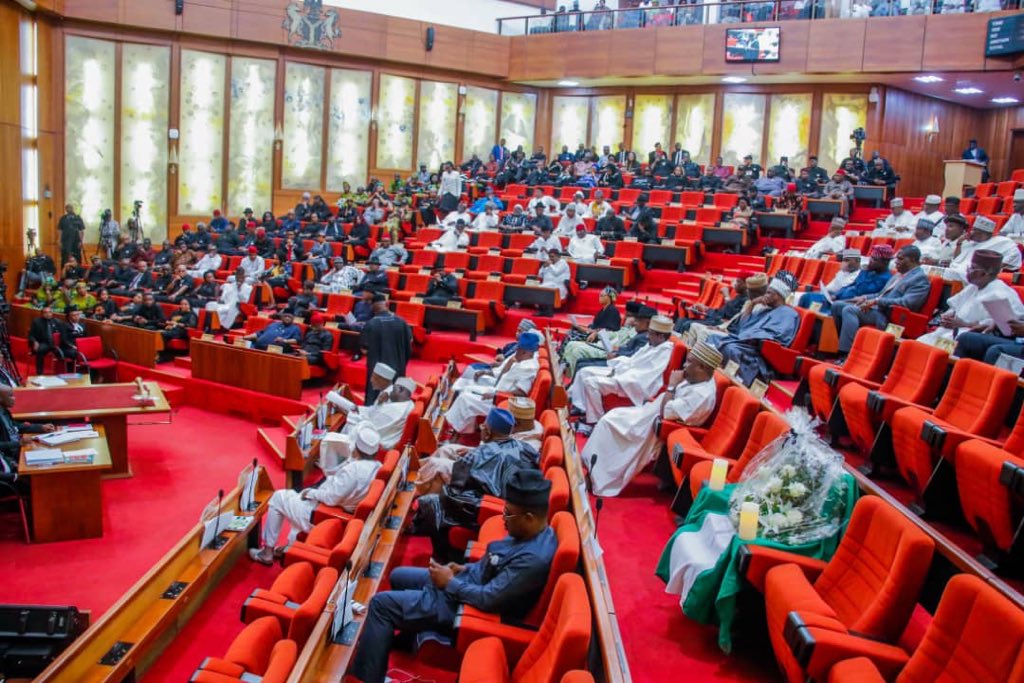 President of the Senate, Ahmad Lawan has said that it is the wish of the National Assembly that Nigerians in diaspora are able to exercise voting right in time of elections in Nigeria.

Sen. Lawan made this known when the Chairman of Nigerians In Diaspora Commission (NIDCOM), Hon. Abike Dabiri-Erewa led a delegation on a courtesy visit to the Senate President’s office on Wednesday.

“I beleive that at one point, I don’t know when and how far it will take us before we could start diaspora voting. But one thing I can assure you is that National Assembly is doing everything, particularly this 9th National Assembly is doing everything possible to ensure that our electoral processes and procedures are fully supported to make them have more transparency and integrity, and that is what we want to achieve at home.

“We are simultaneously working to ensure that Nigerians outside of Nigerians are able to vote and have their votes count.

“It is very important we get the electoral process right. We have passed the electoral Act(Amendment) bill, we are now at the verge of having a harmonisation of the two versions of what passed in the Senate and the House of Representatives.

“I believed that at the end of the day the National Assembly will send to the Mr. President a very good electoral Act amendment that will change for the better the electoral environment in this country.

“And of course, Diaspora voting is a wish for all of us, and when we reach there, we must ensure that every part of our diaspora community in every part of the world is given the opportunity to participate.

“And we have to make sure it is foolproof so as not to create another avenue for merchants of rigging to go and perfect their acts of rigging.

“We have to provide the opportunity but it has to be foolproof and all encompassing, giving everyone outside of Nigeria who wishes to be part of election process to participate,” Lawan said.

Sen. Lawan urged the Commission to work in synergy with the Ministry of Foreign Affairs in the implementation of the National Diaspora Policy recently ratified by the Federal Executive Council.

“So, you need to put the two institutions together in order to see how you can work in such a manner that what you do and what the foreign affairs ministry does are always in tandem and collaboration to bring the best we expect from the two agencies,” the Senate President said.

Sen. Lawan said Nigeria had a duty to protect its citizens wherever they are in the world.

Also speaking in similar vein, the Deputy President of the Senate, Ovie Omo-Agege who is the Chairman of the Senate adhoc Committee on the review of the 1999 Constitution said his committee was not opposed to diaspora voting.

“At some point, we will have all Nigerians cast their votes irrespective of where they are domiciled.

“But the position that we have taken for now, while we support that, a proper modality needs to be put in place.

“We thought the best way around it at this time is to liaise with INEC to come up with a proper framework for us to include in the exercise and I have the privilege to share that with the Chairman of NIDCOM,” Omo-Agege said.

Earlier, Dabiri-Erewa said the visit was mainly to present to the Senate President a publication titled “+600 Diaspora Icons,” a compendium of stories on more than 600 Nigerians in diaspora who have glass shattering records.

“We know that we have negative stories about our brothers and sisters in the Diaspora but we have more of positive than negative. All we need is a more intensive engagement,” Dabiri-Erewa said.

She noted that the request for diaspora voting is a gradual process that could be achieved in the near future.

“We are not saying diaspora Voting should be done tomorrow,” she said.