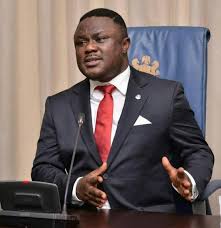 Chairman of CSS Group, Kennedy Opara disclosed the choice of the state’s bagging company during a courtesy call with his team on the governor in his conference room in Calabar.

Opara disclosed that CSS, before now, relied on China for the bagging of its products “but when I heard that Ayade has set up a bagging company, I said to myself, why should we be spending that money on China when my best friend and brother is producing bags? It is better I invest in what he is doing.”

Offering reasons for CSS Group’s choice of  the Cross River State-owned company, Okpara said: “We decided that instead of us to continue sending  money out by ordering bags from China, why can’t we come here and meet with you that we need a tamper-proof bag. A bag that cannot  be tampered with tomorrow. That is what we are looking for.”

According to him, “We do not have any business going elsewhere because you see, if you do not patronise what you have, what you have will not recognize you.”

While commending Governor Ayade on what he described as an aggressive agro-industrialization initiative, the former Chairman of the Nigerian Pilgrims Commission said: “Your aggresive agro-industrialisation drive is second to none. This is a state that before now, agriculture was not known, but you have changed the narrative.”

The CSS boss further hinted that his company and its Isreali partners have trained a number of Cross Riverians in the mechanics of Agricultural production, expressing optimism that the collaboration with Cross River in the area of bagging would yield dividends.

Governor Ayade while lauding Okpara for making the state’s bag outfit his company’s preferred choice, said “it was proof that Nigerians are now interested in buying made in Nigeria goods,” adding that the move will further deepen the economy of the state.

On the status of the many industries established by his administration, the governor stated that “we have pressure coming from people who want to buy off our factories.

“So the privatisation council is working on that. But the good news is that we’ve got a friend and brother who is here to patronize us.

“I want to thank you so much and thank you that you are here with a cheque in the pocket ready to make a deposit for our bags, this is a huge encouragement that will deepen our economy.”

(FRANK TALK) SARS: Between the baby and the bathwater