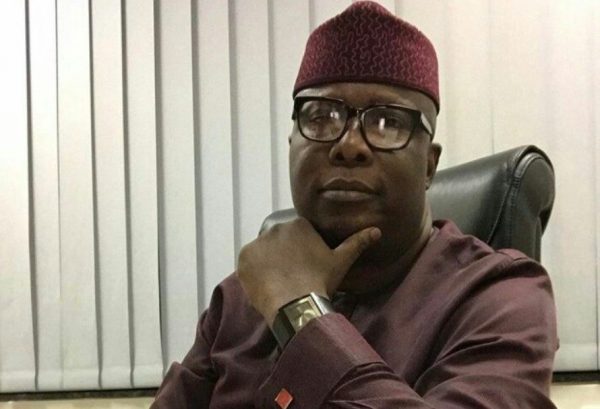 From Priscilla Ofunre, Ado-Ekiti
The All Progressives Congress (APC) in Ekiti State was thrown into confusion, on Friday, when news filtered that alleged plot to suspend the Special Adviser to President Muhammadu Buhari on Political Matters, Senator Babafemi Ojudu, have commenced.
Ojudu alongside Dr. Wole Oluyede, Hon. Oyetunde Ojo, Chief Akomolafe, Engr Ayo Ajibade, Bunmi Ogunleye and Ben Oguntuase on behalf of other aggrieved leaders of the party are in court challenging the validity of the ward, local government and State Executives of the state chapter.
The case filed at the Federal High Court in Abuja had twice been mentioned in court and adjourned for further hearing to July 6.
The President’s aide had last week in an interview accused the state governor, Dr Kayode Fayemi of running the affairs of the party as his personal business, saying all internal mechanisms towards resolving all issue had been frustrated by the governor.
He also alleged that Governor Fayemi had done little or nothing in the state since he was elected in 2018.
Reliable sources close to his Ward 8 in Ado-Ekiti, the state capital revealed on Friday that members of Ojudu’s ward executives were invited by the State Working Committee (SWC) led by Chairman, Mr. Paul Omotosho to the party secretariat and were instructed to commence the suspension process.
The source said, “The chairman while addressing the Ward executives said he was sent by the Governor to instruct them to sack Ojudu from the party. Expectedly , we did not agree with it because this is a man that has been contributing to this party for years here. We, the executives said we cannot do that to one of our strongest members.”
” We told them to tell us his offence, they could not convince us and we insisted we will not do it but they can go ahead at the state level of the party to do whatever they like. As far as Ado ward 8 is concern, Senator Ojudu has not done anything to warrant suspension.”
It was gathered that the meeting ended in deadlocked but the source said that the ward executives have been invited again for another meeting on Monday “where it is believed they will be pressured to carry out the suspension.”
When contacted, Ojudu said he was informed this afternoon (Friday) that the State Working Committee has started the surreptitious moves to suspend him.
“Yes, I have been told that they are making moves to suspend me. They have called the ward executive and started pressurising them to sign my suspension, which they resisted”, Ojudu added.
But the Publicity Secretary of the party, Mr. Ade Ajayi denied the reports of the moves for the suspension of Ojudu, calling on members of the APC to disregard it.
” I heard about it but it is not correct and I want our people to disregard the report. We will invite the ward executives to tell us where this is coming from and we will know what to do,” Ajayi said.

OPINION: A ‘good setback’ by 60 years