Crisis brews in Imo over choice of traditional rulers chairman 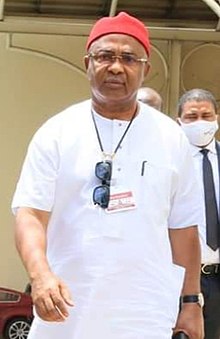 Crisis seems imminent in Imo State over who occupies the position of Chairman of the state’s Council of Traditional Rulers.

In an attempt to forestall breakdown of law and order, the Okigwe Peoples Assembly (OLA) has sent an appeal to the state governor, Senator Hope Uzodinma, not to succumb to the schemes of a cabal but to respect existing rotational arrangements in the appointment of the Eze Imo, as the chairman of the council, is known.

Extending good wishes to the governor while also congratulating him on his upcoming one-year anniversary in office, as Governor of Imo State on the 15th of January, 2021, OLA appreciated the governor for providing dividends of democracy since he came to office.

In the letter, OLA noted: “We wish to make this urgent appeal to you to favourably consider Okigwe Zone in your appointment of the New Chairman of Imo State Council of Traditional Rulers, having dissolved the Eze Samuel Ohiri-led council a week ago.

It expressed fear that based on rumours flying around, the age-long tradition may be jettisoned. “However, in the past few days, there have been consistent rumours of attempts to appoint a Traditional ruler from Orlu Zone, as the new Chairman of Imo Council of Traditional Rulers,” the letter, which was signed by Barr. Innocent Obiefule, Chairman; Henry Anthony Anyanwu

“This information, which we believe is a rumour, was given credence by an Owerri-based newspaper -White Paper- of 27th of December 2020, on the front-page news of the same date, we quote ‘… Governor Uzodinma finally replaces Eze Ohiri with Eze E.C Okeke, as new Eze Imo, as he Dissolves Council of Traditional Rulers’.

“Our investigation has shown that Eze E.C. Okeke of Amaifeke Autonomous Community, Orlu, is being Sponsored by a cabal from Orlu Zone to replace Eze Samuel Ohiri, as the new Eze Imo.

This attempt is against equity, a good conscience, fairness and natural justice.

“Okigwe people are demanding that the next Chairman, Imo State Council of Traditional Rulers (Eze Imo) be chosen from the zone. We sincerely believe that our amiable governor shall not fall prey to this divisive attempt by this cabal to bring instability into this administration.

“Finally, Okigwe people shall hold their prominent sons, who are close to His Excellency, the Governor of Imo State, like Professor Maurice Iwu, Rt. Hon. Paul Emeziem (Speaker, IMHA), Chief Tony Chukwu, Hon. Chukwuemeka Nwajiuba (Min. of State, Education), Chief Cosmas Iwu (SGI), and others responsible if His Excellency does not adhere to the existing zoning and rotation arrangement.”

‘Why COVID-19 vaccines may lose potency before arrival, administration’