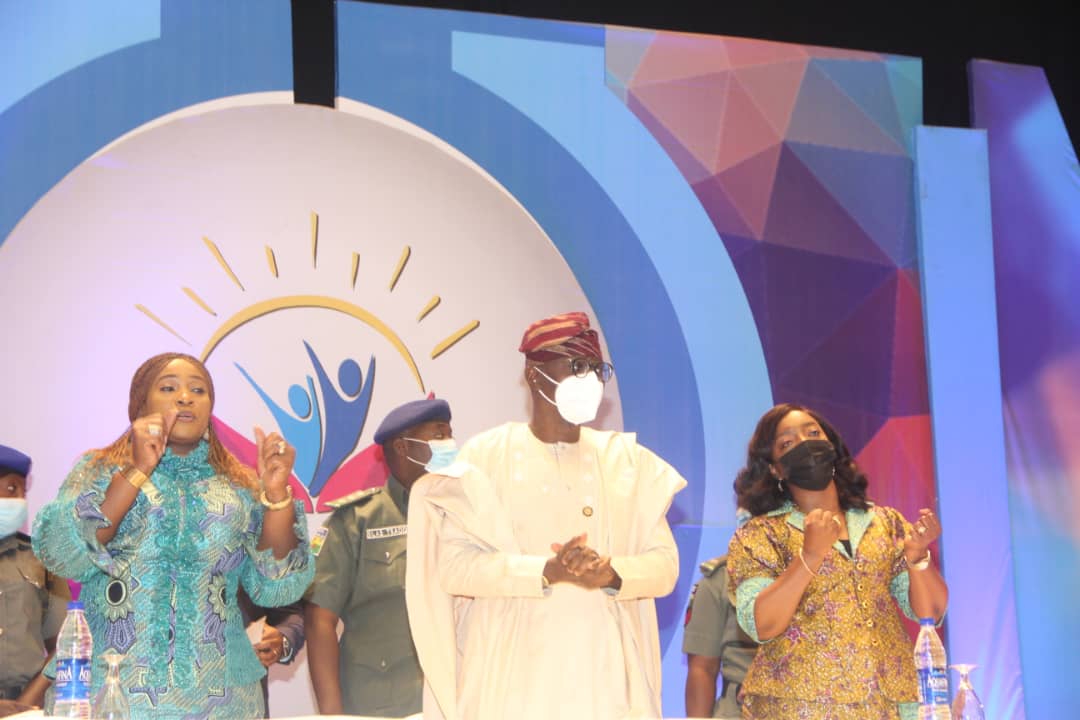 Women, at the closing ceremony of 2021 Committee of Wives of Lagos State  Officials (COWLSO) conference, have urged male politicians in the country to create enabling environment for women to contribute their quotas to the political space in the country.

They also called for legislations to  create enabling environment for women to participate in politics.

In a communique issued, on Thursday, at the end of a 3-day conference held at Eko Hotel and Suites, the women argued “there are still not enough women in the political space or at the helms of affairs.”

“Even though women are blessed with the power to transform and recreate anything they are a part of,” there are several inhibiting factors which they noted include: “lack of support and equal opportunities; denial of education for the girl-child, gender-based violence and more, all of which must be overcome to make this a reality” they stated in the communique.

The women further observed that national development is incomplete without women leadership, which they said “in its most minute form starts from the home.”

They  lamented the consequences of work-life imbalance which they recognised are dire to the individuals and the society.

“Other observations made by the Committee include:

“The failure of a family system aids the derailment of future leaders from embarking on a fruitful journey to a greatly rewarding life on the long term. There isn’t still enough awareness to the fact that certain cancer types are preventable only if detected early enough.

“Many micro, small and medium Enterprises are still not aware of the importance of record keeping and expenditure prioritization to their businesses, even in their individual lives

“COVID-19 came, hit hard and created a huge vacuum in all spheres of our lives and endeavours, which we are still grappling with even today

“Improved personal productivity, fulfillment and health are some of the impacts of sexuality and family planning on nation building. Hence, they should be encouraged while downplaying the several myths associated with family planning,” it stated.

In their recommendations, the women further called on the national and states’ assemblies to pass laws instituting policies, procedures, actions and expectations that would enable workers to pursue more balanced lives “which would go a long way in achieving success at it.”

According to the Committee, “These could include Flexible work schedules, Paid Time Off (PTO) policies; Responsibly-paced time and communication expectations; Organization-sponsored family events and activities.”

The Committee also submitted “that families are the bedrock on which a child should discover the first set of values for life.  Hence, families should employ intentional parenting and a healthy co-parenting dynamic, to ensure that the foundation is not destroyed and our children are not at the mercy of external socialising forces which they may not be able to filter for proper development.

“That the government through the relevant ministries/agencies should create robust operational structures (where they do not exist), to fosters the development of a Strategic Family Support/Intervention Policies and Plans which can be mainstreamed down to the Community level to enable parents access the resources they need to actualize stability in their family, environments and raise the quality of their interactions with their children.”

On cancer, the Committee resolved  “that as a people, we should raise awareness and engage in advocacy to encourage screening so that the three preventable types of cancer,  breast and cervical (for women) and prostate (for men) would actually remain prevented.

“That the government through the Ministry of Health and various stakeholders should also institute policies mandating screening for these checks and HPV Vaccination for the girl-child from age 10.”

In his remarks, the host of the Conference and Governor of Lagos State, Mr. Babajide Sanwo-Olu, assured that his government would pay critical attention to the recommendations emanating from the Conference.

“I am indeed glad with the quality of the discussions and the panelists, and the quality of the conversations that have been drawn at the end of this conference. As we draw the curtain, I   want to reinstate that the recommendations coming out of this conference, we would take them very seriously. We would look forward to implementation of all the recommendations,” he said.

The governor added his administration is committed to propelling interventions across all sectors for development that appeals to good live for all, assuring women course remains critical to his government.

On COVID-19, the governor who feared a fourth wave in view of the festivities of December, said his administration has taken a proactive step to ensure no less than four million Lagosians are vaccinated before the end of December.

Mentioning that the character of Lagos with the broad inland, air and water border activities put the State at the risk of infections, he said efforts have been put in place to raise the number of vaccination centres to no less than 800 by Monday, November 01, 2021.

He however called for mobilisation for the process, appealing to residents while assuring the safety of the vaccine.

In his closing remarks, Edo State Governor, Mr. Godwin Obaseki who was represented by the State’s Attorney General and Commissioner for Justice, Oluwole Iyamu, SAN, said Lagos remained a pace setter in courses of development in the Country.

“Whereever Lagos goes, eventually Nigeria goes. This State has exported so much to so many other places. There are people who have lived in Lagos and have taken the adventures back home in other to develop it. We want to ask you to continue,” he said.

According to him, the lessons learnt from the Conference have been noted and same would be introduced and implemented in his home State.

Quoting the saying that when you “train a women, you train a nation”, Obaseki who closed the Conference applauded the philanthropic disposition of the Committee towards development courses, charging them “not to become weary.”

In her remarks, Lagos First Lady, Dr. (Mrs) Ibijoke Sanwo-Olu, said in line with the theme of the Conference – “Awake” – which was designed to bring women in tune with modern realities and opportunities, efforts were strategically directed at women empowerment.

She further emphasised on the need for equal opportunities for women, stressing it was paramount to give them a right of place in leadership position.

According to her, the “positive impacts of the mind shifting training” held during the conference “would be felt across all strata of the society.”

Mrs. Sanwo-Olu who is the Convener of the Conference, moreover, appreciated all supporters for their roles in making the conference successful.

Co-convener, Chief Oluremi Hamzat,  charged the women to begin to work  towards the THEME of the Conference “Awake” in the light of new realities.