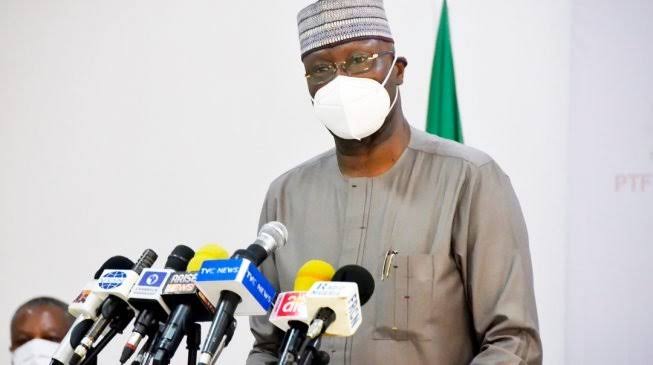 The Presidential Task Force on COVID-19 on Sunday submitted parts of its recommendations on partial reopening of schools, places of worships and some additional businesses for possible consideration by President Muhammadu Buhari.

The chairman of the PTF, who is also the Secretary to the Government of the Federation, made this known to State House correspondents at the end of a closed door meeting with President Buhari at the Presidential Villa, Abuja.

According to him, the PTF has no problem with state governments that ordered reopening of places of worships in view of the power given to the states to do so by the constitution, adding that the states are sub-nationals.

He said: “That’s part of what we have considered in its totality. We will await Mr President’s on that, once I receive his approval, going forward, to certain recommendations we have put in place, we will know how that would happen.

“The issue of easing up, you know we are in the first phase, we had an extension of two weeks for the first phase, the next phase should be the second phase and along with that will come in with a lot of recommendations, which we expect Mr President to consider.

“We have made the appropriate recommendations, but you know that Mr President is the only one that can take decisions in respect of that.

“In the framework, the states are sub-nationals, they have their own responsibilities too.

“So, it is in the exercise of those responsibilities that they had meetings with those religious bodies and agreed on the guidelines and protocols on how they open up, but in the framework of the national response we are taking that into consideration.’’

On whether Nigeria is winning the fight against COVID-19, considering the rate of infections, Mustapha said:

“We are winning. As a matter of fact, you juxtapose the rate of cases with our fatality rate, which is basically about three per cent, in other countries and other climes, it’s over 10 per cent.

“But the most important thing that you will realise, when we started this exercise, we had only five testing stations, now we’ve ramped it up to 28, without the expected increase in the number of deaths.

“We have gone beyond 60,000 now, that reflects in the number of confirmed cases

“As we even open up and accommodate more enterprises, because we are trying to have a balance between livelihoods and life, there’s a likelihood of increase in transmission in cases,’’ he said.

Mustapha assured that essential parts of the economy would continue opening up to boost socio-economic activities across the country.

“We have started, even in the first phase and the extension that came with it.

“Essential parts of the economy was opening up by way of allowing agricultural production, people that produce fertilizers.

“The oil and gas industry was never closed for one day and some aspects of the financial sector were opened.

“After we receive Mr President’s approval tonight or tomorrow morning, we will now know which segment of the economy he has allowed to open,’’ he further revealed.(NAN)