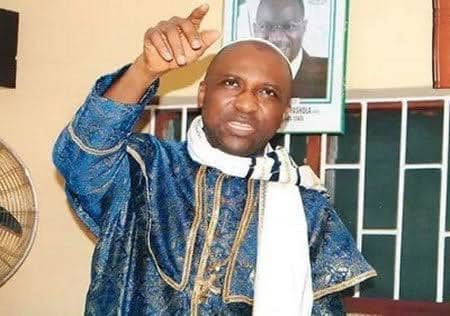 …Offers of free cure with anointed water, oil, …Says, ‘It’s time to turn to God as medicine has failed’

Popular cleric and seer, Primate Elijah Babatunde Ayodele of the Inri Evangelical Spiritual Church, with headquarters in Oke-Afa, in Isolo area of Lagos State, has dropped a bombshell after his astounding prophecy on the Coronavirus pandemic had been fulfilled.

This time, he said all those who have stolen the wealth of the nation would be hit with the virus.

Primate Ayodele, who also announced that he has prepared 10,000 anointed bottles of water and oil which he assured would cure and prevent COVID-9, declared that he would be giving spiritual cure and prevention to Nigerians and anyone free of charge.

The prophet said, “Mark my words! This pandemic called COVID-19 will soon pass away as the Lord has revealed to us. We had said it that it will come as reports in the dailies and online from March 2019 have shown.

“COVID-19 will hit those who have emptied the nation’s treasury for their personal and greedy comfort. We are seeing some signs already. The government’s effort in tackling the virus has been highly commendable but they should not discourage prayers because medicine has failed us; world leaders have also failed us. This time we must turn to God.

“Gathering of the people of God to pray shouldn’t be discouraged but number of such should be reduced”.

Primate Ayodele’s prophesy was coming on the heels of the astounding fulfilment of his prophecies for 2020 which recent developments across the world have revealed.
At least 40 predictions of the cleric as listed in his annual book of prophecies of the 2019-2020, have been fulfilled. The developments included, the Ukrainian Plane crash, gas explosions in Ebonyi, Kaduna and Lagos states, Boko Haram killing soldiers and attack on Christians, Iran – US war,  UBA’s sack of 4,000 staff,  increase in energy tariff,  fire outbreak at the mortuary, death of chairman of Ikosi-Isheri LCDA – Engr. Abdufatai Oyesanya
and  NURTW losing its vice chairman and the fight and crisis within the factions.
Others were his warning to pray against death in Aso Villa as manifested in the death of an Assistant Director in the State House, Abuja, Laetitia Naankang Dagan.

Primate Ayodele also predicted of the impending death arising from Lassa fever where 14 persons were killed in Ondo and Kano states, the Op. AMOTEKUN crisis, removal of Governor Emeka Ihedioha of Imo State by the Supreme Court which were prophesied since January 6, 2019 in the Daily Independent newspapers.

Primate Ayodele’s prophecies also included death of a former Kenyan president, death of a musician and footballers.
The cleric had also predicted the dethronement of the Emir of Kano, Sanusi O. Sanusi and an Eze in Igbo Land and also the death of a Nollywood star.
He equally predicted the Abule-Ado explosion  in Lagos, reoccurrence of the Ebola disease in some African countries and Nigeria, the crisis in the Buckingham Palace, among many others all of which had since come to pass.

It was the same Primate Ayodele who predicted bank recapitalisation, inability of some states to pay N30,000 minimum wage, oil price crash, Donald Trump’s impeachment survival, Oshiomhole’s travails in the APC, Keystone building collapsing and the bank having another CEO.
The prophet had also said that governors Obaseki and Akeredolu would face challenges getting second terms in  Edo and Ondo states.

The reaffirmation of PDP governor in Bayelsa State was predicted by him as well as others which included the Asian pandemic disease and mentioning China specifically. Primate Ayodele had also warned of a possible new Pope for the Catholic Church in 2021.

During one of his services in his church at the Lagos headquarters, last year, Primate Ayodele had urged members of the church to pray against a certain pandemic which would bring the world to her knees. He ordered two months fasting and prayers for his church members and told newsmen to urge the world to pray.

Some of the members who spoke with newsmen had boasted that they could not be infected by VOVID-19 because of the prayers and because they had the water and oil made for them by the cleric.
However, the members have reacted to some reports on the social media which claimed that the cleric made some unfulfilled predictions. They said the cleric had never said that PDP would win the last presidential poll, that he had warned the party to choose former Senate President Bukola Saraki instead of Atiku Abubakar. Several reports by the reporter confirmed the members’ denial.