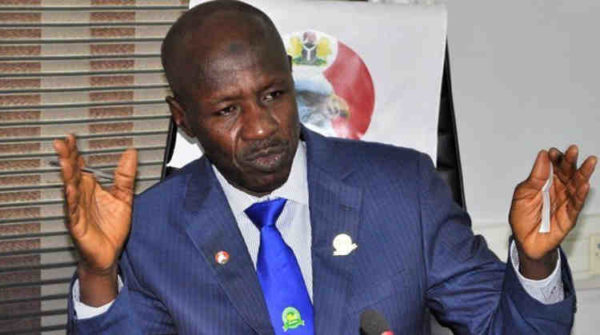 Share
An FCT High Court in Apo, on Tuesday  granted leave for substituted service on the acting Chairman of  the Economic And Financial Crime Commission (EFCC), Ibrahim Magu.
Justice Silvanus Oriji , gave the order substituted service, after listening to the submissions of  Chief Mike Ozekhome ,SAN,
counsel to an Abuja-based lawyer, Monday Ubani and a former Senator, Christopher Enai.
Oriji had on March 26, granted  leave to an exparte motion filed by Ozekhome to charge Ubani and Enai to court or release them on bail on or before March, 28.
Related Posts

The judge held that the court had power to make an order for substituted service of the process where it appears that  prompt service cannot be conveniently effected.
”In exercise of the power of the court under Order 7 rule 11, I grant  this motion,” he said.
He said since the bailiff,  Ishaya Markus,  was denied access to Magu by the armed security personnel at his office at the EFCC Headquarters.

Ozekhome said that the operatives told the bailiff that he can only see Magu on invitation.
Ozekhome, in the motion exparte prayed the court to order form 48 and 49 be served on any officer at the mail registry of the Chairman of the EFCC  and legal Department at Headquarters in Jabi.
He also prayed an order of the court by posting same at the gate of the head office of EFCC.
Ubani, a former President of the Nigerian Bar Association (NBA) Ikeja branch and Enai, ex senator representing Bayelsa were invited and detained by the EFCC operatives on March,19.
The applicants were detained for standing as sureties for Ngozi Olejeme,  who once served as the Chairman of the Nigeria Social Insurance Trust Fund from 2009 to 2015.
They are still yet to be charge to court by the EFCC. (NAN)

NYSC urges corps members in Jigawa to be security conscious