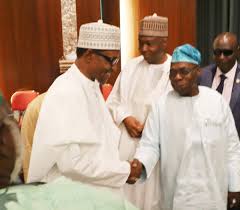 The National Council of State today in Abuja expressed satisfaction with the level of preparations of the Independent National Electoral Commission (INEC) for the conduct of the forthcoming general elections.
Gov. Rotimi Akeredolu made the position of the Council known when he briefed State House correspondents on the outcome of the meeting, which was presided over by President Muhammadu Buhari at the State House.
Akeredolu said that the endorsement of the INEC preparedness for the election followed a presentation made by the Chairman of the commission, Prof. Mahmood Yakubu, at the meeting of the council.
He emphasised that the council was convinced on the level of preparedness of the electoral body.
According to him, the chairman also informed the council that the commission had embarked on training and retraining of staff for the successful conduct of the election.
“He informed the Council of the preparedness of INEC and everybody in the hall was convinced that INEC was ready for this election and a lot of things have been put in place.

READ ALSO:CCT rejects court orders stopping Onnoghen’s trial
I think we all concluded that it is important for the chairman to even speak to the nation on the preparedness of INEC for this election – that would convince all of us that this forthcoming election is going to be free and fair.
Look at it, they have improved card reader, the details of what had been done to improve it was made known.
It was made known that the process of continuous accreditation and voting system (vote at the same time and you leave) was the best.
He also told the Council that they are not lacking in terms of finance and that all the monies appropriated have been given to them and that they are ready for the election.
He went further to inform the Council that all training and retraining of every category of staff that they (INEC) will use, they have already started and they are having consultations with every group of people, religious, artisans and trade unions to let them know (about the election).
So, everybody was convinced that INEC, as at today, is ready for the elections and questions were asked, he was interrogated and he responded and gave adequate explanation to the satisfaction of all of us,’’ he said.
The National Council of State also endorsed N27,000 as new National Minimum Wage,
The Minister of Labour and Employment, Dr Chris Ngige, who also addressed the correspondents on the outcome of the meeting, disclosed that the council endorsed N27, 000 as new National Minimum Wage.
He, however, said the Federal Government would pay its workers N30,000 as its minimum wage as demanded by organised labour.
The minister revealed that the bill on the new wage of N27,000 would be transmitted to the National Assembly in the next 24 hours for passage into law.
According to him, the N27,000 is the benchmark for all employers of labour with more than 25 workers on their payroll, emphasising that no employer of labour with more 25 workers should pay less than the proposed N27,000.
“On the issue of national minimum wage, we have held series of consultations starting from the inauguration of the tripartite committee in November 2018, to the Federal executive Council, the National Economic Council.
“Finally today, the Council of State and these three organs have permitted the President now to transmit to the National Assembly the new minimum wage bill.
“This is in consonance with the fact that the issue of national minimum wage prescription is in the exclusive list second schedule, item 34 and being on that list, it is not a job that can be done by the executive alone.
“The President has to transmit a bill and the National Assembly will take legislative action and return the bill that has been so treated to the President for assent.
“The bill will now amend the 1981 and 2011 act and the highlights are the figure of N27, 000 monthly has been approved for transmission to the National Assembly, frequency of review of the bill is five years to get in consonance with the pension law of the federation as enshrined in the Nigerian constitution.
“Exemptions to this act will be the establishments that are not employing people up to 25 (workers) in number and the various fines prescribed have also been altered,’’ he said.

READ ALSO:Jime, APC governorship candidate, promises new direction for Benue
The minister, however, stated that the Federal Government had resolved to pay its workers N30,000 as the new national minimum wage while the state governments were free to negotiate with their respective staff.
The organised labour had insisted on a N30,000 minimum wage as proposed by the Ama Pepple tripartite committee, while the Nigeria Governors Forum (NGF) proposed N24,000.
The News Agency of Nigeria (NAN) reports that the meeting, which lasted for about three hours, was attended by Vice-President Yemi Osinbajo, former Presidents Olusegun Obasanjo, Goodluck Jonathan, Abdulsalami Abubakar and the former Head of the Interim Government, Chief Ernest Shonekan.
Others, who attended the meeting included three former Chief Justices of Nigeria, Muhammadu Uwais, Alfa Belgore and Mahmud Mohammed.
However, the Chief Justice of Nigeria (CJN), Justice Walter Onnogen, former military President Ibrahim Babangida and Gen. Yakubu Gowon were absent at the meeting.
The council also observed a minute silence for late president Shehu Shagari.(NAN)

Robbers kill woman while begging for her husband’s life