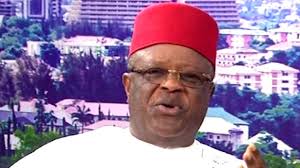 Controversy has trailed the purported defection of Governor Dave Umahi of Ebonyi State, from the Peoples Democratic (PDP) to the All Progressives Congress (APC).

“Yes, Governor Umahi’s defection to our great party, APC, is a step in the right direction. We cannot afford to remain in opposition. We must join the ruling party to continue to reap the dividends of democracy,” the lawmaker, who is the only National Assembly member from Ebonyi State elected on the platform of APC, said.

According to him: “We don’t need division in South-East; we need unity in South-East. We need to be part of the central government. We can’t continue to be in opposition

“I am calling on other governors in the South-east to toe the line of Governor Umahi and join APC. We have to be at the centre, we have to join the mainstream politics for overall development of our zone and the country in general.

“President Muhammadu Buhari has done well. Everybody should join the APC to encourage him,” he added.

However, in a press statement issued, in Abakaliki, the governor’s Special Assistant on Media and Publicity, Mr. Francis Nwaze, denied that Governor Umahi had denied to the APC.

According to the statement, “My attention has been drawn to the news making the rounds in some quarters of the media, alleging that the Governor of Ebonyi State, Engr. David Umahi, has defected to the All Progressives Congress (APC).

“The news is a product of a figment of imagination on the part of the carriers as Governor Umahi was, is, and is still flying the flag of the Peoples Democratic Party (PDP).

“It is, however, difficult to observe how people are easily persuaded to believe in fake dummies in the name of rumours.

“If for any reason, Governor Umahi wishes to leave Peoples Democratic Party (PDP), it will be officially communicated and can never be a product from rumour mongers,” it concluded.

Also, Umahi has personally dismissed the report of his purported defection to the APC, describing it as ‘not true’.

(OPINION) #ENDSARS: Let Us Continue to Protest in the Anambra Way