COLUMN: When will the Sheikh answer for his pro-bandit posturing?

The media fondly call him a popular Islamic cleric, though, not many Nigerians have heard of him. Not until recently, that is.

To those who know Sheikh Ahmad Abubakar Gumi, he is a friend of the bandits. He goes about doing good to and empowering them in word and deed. Photos of him meeting and sharing money with them have made the rounds. And he would want the federal government to give the criminal elements attention and recognition.

That is how he comes across and one cannot explain how this correlates with the title ascribed to him. Going by his cavorting with the thieving bands terrorizing North-West Nigeria, his moves raise many questions.

One can’t help but wonder why anyone in their right senses would be making the kind of case Gumi makes for criminals.

A few days ago, the unfeeling cleric, without regard for victims, said no school was safe until the federal government appeases the terrors of the North-West.

As if that was not enough, Gumi, still in an attempt to  legitimise these terrorists, last week, compared the marauding herdsmen with the Indigenous People of Biafra and concluded that herdsmen’s crimes weigh significantly less than those of IPOB. Gumi said on Arise TV that one group “is killing our gallant men” while the other is “kidnapping children to make money, not to kill them.”

It is not as though Gumi is not aware that since December 2020, the NW gang has taken hostage more than 800 school children across the north and that this security challenge has led to the death of several, notably the five Greenfield University undergraduates.

Since IPOB launched its militia called Eastern Security Network, attacks on security operatives and government infrastructure have escalated. But why Sheikh Gumi will be justifying one evil of the NW because of another of the SE beats rational thinking.

In any case, many are quick to remind him that the emergence of IPOB and its militia arose from the ruins caused by the herdsmen in the first place.

So, is there any connection between Gumi’s open romance with and support to the bandits with the fact that despite the killings and destruction they leave behind, hardly are they ever apprehended? To think these killer-herdsmen were initially said to be foreigners leaves a lot of unanswered questions.

Instead, Gumi keeps hurting public sensibilities with either a call for them to be engaged by the Federal Government or get paid for bringing pain and sorrow to parents.

The same Gumi who, in another development, reveals that there are about 100,000 armed bandits in the North-West alone must indeed consider the rest of Nigerians as idiots when he insisted that until the government engages with the herdsmen, no school is safe. 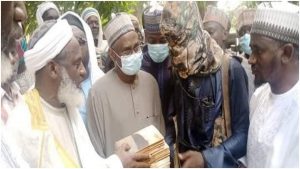 Perhaps, he is right that the government could not protect schools without first ending banditry, but just read this argument:

“To secure schools, why not engage the bandits? Engage them; they are not many. You can count them with your fingers. How can you guard schools? It is not possible. In the whole North-West, there may not be more than 100,000 bandits. And that is just a drop in the ocean. That is talking about those with weapons; because not all of them have weapons.”

He argued that 90 per cent of the armed bandits protect themselves against cattle rustlers.

“They are victims too… Bombardments will only worsen the situation …Remember they also have our children.” What a justification for murderous elements!

The cleric, while speaking to a national daily on efforts to rescue the kidnapped pupils of Tegina Islamic School in Niger State, said the kidnappers were disappointed that he negotiated with them without involving the Federal Government.

Meanwhile, the bandits had demanded N200 million from the victims’ parents, which was later reduced to N150 million. Gumi said despite efforts to get the pupils out, the bandits insisted on a ransom.

Now, if the cleric has this close rapport with the terrorists, one would think he could talk them out of their deadly mission, except there is something in it for him.

“This (kidnap of Islamic pupils) proves to the nation that the bandits are not indoctrinated, they are just looking for money and I think that this is a good prognosis.

They are not targeting a religion; they are not ideologues, which are difficult to deal with. We should not forget that they are not educated, formally or informally. They are just going about with cattle, and suddenly they found a lucrative way of finding money. 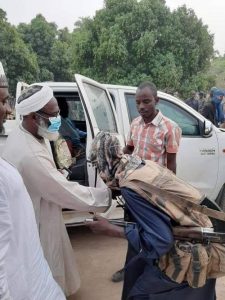 All they want are good engagement, education, and enticements like jobs and other things, Gumi added.

Of all the millions of unemployed, half-employed, hugely exploited, struggling Nigerians, who still go about trying to eke out a legitimate living, Sheikh Gumi does not see the need to make a case for a better life for them? He would rather solicit rehab for and cooperation with those that ought to be in prison.

So, don’t come dragging those who smell a rat in Gumi’s newfound love. Otherwise, he should be telling the authorities what he knows about the operations of these bandits.

That has not been the case. Instead, he is walking freely around and having photoshoots as well as sharing money with them in the forest. And don’t ask me who provided the money and why bandits are being paid.

Recall that Katsina State Governor Bello Masari had also posed for photographs with the bandits, presumably somewhere in the forest too and even went on to grant amnesty to so-called repentants.

While reacting to an incident in his state sometime in February this year, Bello who said that Niger was experiencing infiltration of criminals from neighbouring Benin Republic, noted: “The bandits are Fulani that have no one to control them, even their parents.”

Regretting that he once reluctantly negotiated with them, a development that never yielded any positive result, Bello, as much as said that sitting down and negotiating with hoodlums that never keep to terms of the agreement is a complete waste of time. More so as a governor and chief security officer of a state.

But at the time the Niger State governor was making this point, Sheik Gumi was meeting with the group leader of the bandits, Dogo Gide, in Tagina forest in the state to discuss a peace deal.

This was also the same time that about 42 persons were abducted, including students, staff and their families from the Government Science College, Kagara, Niger State.

But in an interview with BBC Hausa afterwards, Gumi who advocates amnesty for the criminals indicted the Nigerian military for the violent crimes in the region. Claiming that the bandits he met were willing to lay down their arms, the military top brass, he alleged, were deliberately escalating the violence. The military authorities denied this.

Gumi said, “Everyone has witnessed it that we negotiated with these people and they promised to drop their weapons and stop these activities and I even promised to meet the president about the matter. But why will the army bomb their place?”

There must be a reason Gumi feels that terrorists must be honoured, pardoned, protected, and above all compensated in a country where human rights activists are jailed for daring to ask for good governance.

How Sheikh Gumi, with all the incitements and promotion of criminality still walks free in Nigeria today, while innocent people are being taken from their homes or the streets, tagged IPOB and humiliated, and sometimes even quietly eliminated, simply tells how the insurgency war is being fought.

No society can develop in an insecure environment where some cows are treated as sacred and given the express right of way to trample on other people’s rights. Why no one is inviting Gumi to help the state with what he knows of these terrorists should worry the hell out of Nigerians.

And this is happening in the same environment where the government is so obsessed with, and by all means, has yanked off the business of Twitter, a veritable platform that offers most Nigerian youths the opportunity to promote their businesses, among other grand plans to gag journalism practice in Nigeria.

Postscript:
As the press was about to roll for this production, unconfirmed reports came that the Sheikh, the ambassador plenipotentiary of the NW Bandits Ltd, was invited by the DSS to help the state as he ought, although he denied knowledge of such invitation..
~RM