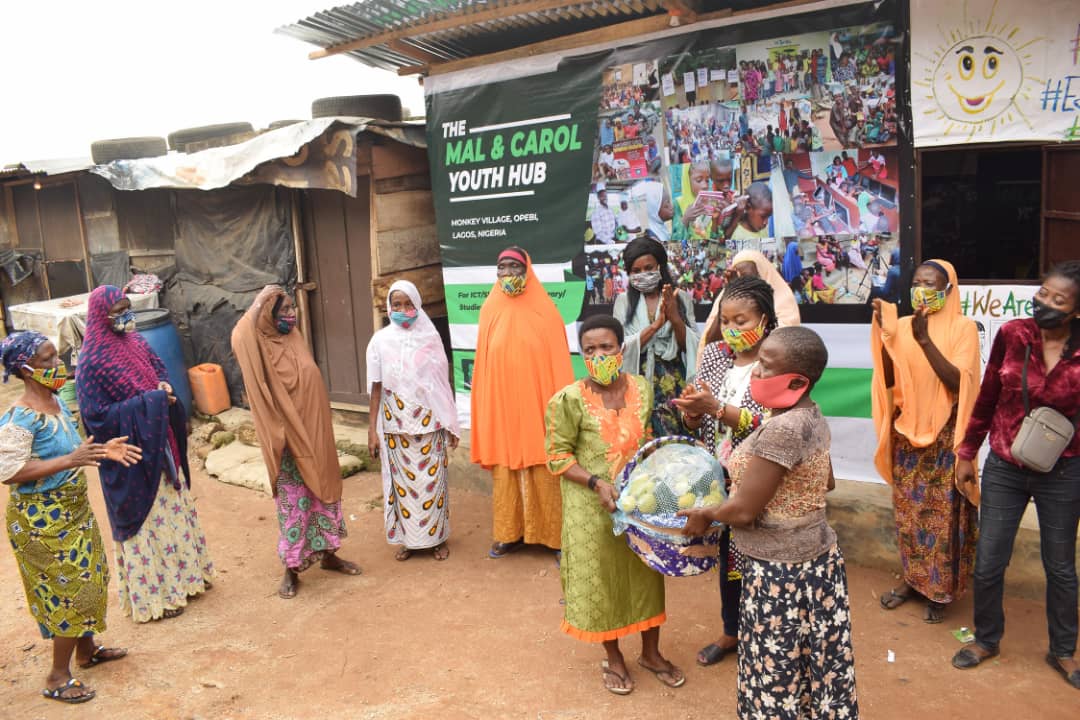 The ICT Center is one of the  five centers to be established by the child’s rights and development NGO in a total of four states with the others being Benue, Plateau and Kaduna (including in three orphanages across the North Central).

At the projects’ commissioning, Betty Abah, CEE-HOPE’s Founder and Executive Director explained that Monkey Village residents resorted to fetching water from a polluted stream nearby after the main road leading to the community was blocked by their rich and powerful neighbours.

She noted that two anonymous donors were attracted to the plights of the community and decided to provide portable water for them, thus, residents would no longer have to worry about getting clean water to drink and use for domestic purposes. This, she stressed is a timely intervention in light of the COVID-19 pandemic whose prevention requires a high level of hygiene.

On the donation of the ICT centre, one of five centres established by an anonymous family, Abah noted that “the children would have opportunity to learn computer and other skills at no cost.  “Children unlucky to be born into poverty (or displaced by conflict) do not have to endure the double tragedy of ICT-poverty in a Zooming age. It is these little gestures in the little and obscures places of the earth that make a huge difference to the neediest and sometimes forgotten and not necessarily the largest or loudest.”

Lekan Otufodunrin, veteran journalist and a member of the Board of Trustees (BoT) of CEE-HOPE who commissioned the projects, stated that the borehole project was attracted to the community  following the NGO’s outcry in the media after the community faced acute water shortage  due to the severity of water scarcity faced there when it was fenced off by their wealthy neighbours a couple of months back.

While urging the children to stay true to their dreams, Otufodunrin advised them against giving up hope for a better life. “I grew up in Ajegunle as a young person. The fact that I can accomplish what I have accomplished today is a proof that anybody can become somebody,” he said.

Residents of the community were full of gratitude to CEE-HOPE and the sponsors for the timely intervention.

Mrs. Adaku Igwebe, 40, a housewife and mother of four, says, ‘We used to trek all around Opebi in search of water. I can’t explain the relief this has brought us, not to mention the improvement in our children’s education with the computer centre.’

‘As the caretaker of Monkey Village, I never imagined in all my life here that such a development would become a reality because as slum dwellers, people thought we were not worthy of good things, but God sent us help in the form of CEE-HOPE,’ said Mr. Dew Mensah, an artisan and resident of the community.

According to Reuben Hogan Anosike, a trader in the community, the projects have ushered Monkey Village into a new era. ‘We are deeply grateful for the opportunities that have been availed our community and our children. We gave up hope after several failed promises but Sister Betty through CEE-HOPE made this a reality for us. We believe that our children will catch up as they are fast learners and they will also be part of the computerised world,’ he said.

Another resident of the community, Mr. Avolume Kupa, an actor, musician and artist (painter and sculptor) who together with another artist, Olumide Bello, carried out the artistic touch to the projects thanked CEE-HOPE and challenged the Lagos and Federal Government to pay more attention to infrastructural development in informal communities ‘especially because they also vote during elections and deserve to be paid back in terms of development’.

Aisha Saleh, 15, a precocious student in the community similarly described it as a  big relief as the restricted access to water was affecting the community’s children academically having to use long hours in search of clean water. In addition, she said, the availability of the computer centre would ensure that they are at par with other students and children from more privileged backgrounds. ‘We thank CEE-HOPE for this and other support to our community in the last four years of their presence here. They are truly God-sent’, she added.

In appreciation of the gesture, the community men donated two standing fans to the centre while the women’s committee presented a large fruit hamper to CEE-HOPE’s founder, Abah.

Several friends and supporters of CEE-HOPE were at the event to witness the commissioning of the projects. They include YinkaKenny, a popular TV presenter and girl’s rights advocate, media supporters including Dayo Emmanuel,  Evelyn Osagie, Tomi Falade as well as Bimbo Oshobe, a well-known mobiliser in informal communities across Lagos who first discovered Monkey Village as a CEE-HOPE volunteer among others.