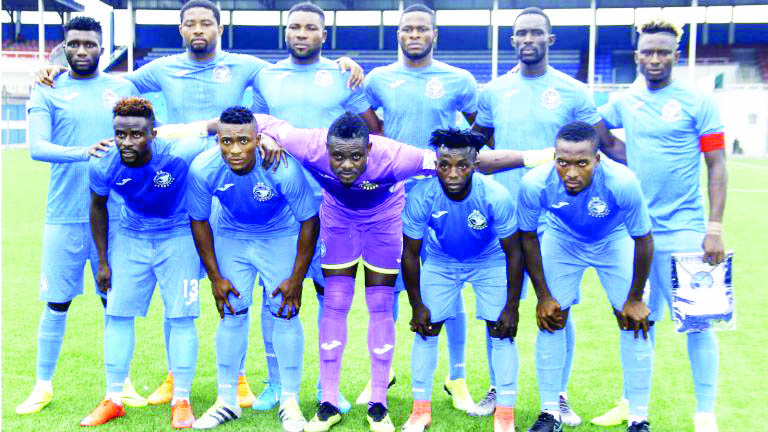 Two-time African champions, Enyimba are on the match again, doing well in the CAF Confederation Cup where they would on March 1 play host to top Guinean side, Horoya in one of the quarterfinal pairings of the competition.

Enyimba may be doing well in the African second tie club tournament, but players of the club are not happy with governor of Abia State, Dr. Okezie Ikpeazu who they believe is not doing enough to fire them up as they strive to do the country proud in the continent.

What is virtually on the lips of every Enyimba player as they interact in pidgin English is that…”Ikpeazu no be am at all” which means…”Ikpeazu is nothing but a kill joy who has failed to motivate the team.”

The players are quick to note that the Abia State governor has failed to fund the team well, even as he has also failed to reward them for the previous trophies they won and handed over to him.

“We don’t want any one of us to be singled out and attacked for saying the truth, just get the message out there for us that we are not happy with the governor. He has not been treating us well. We have been winning under his administration but we have nothing to show for it. We hand over a trophy to him, he makes promises that he never fulfills. He is not funding the team well. Travelling out is even a problem for a big team like Enyimba. You can see the “Eze goes to school bus” he gave to the team.

This is a bus that can not make a trip to even Enugu here in the South East without breaking down ten times on the road. Abeg the man no be am at all…” one of players told The Nigerian Xpress Sports when they returned home after their 5-2 away victory over San Pedro of Ivory Coast.

The away victory saw Enyimba land in the quarterfinals of the competition.

While the players writhe in the pain of neglect, new manager, Fatai Osho says he demands for nothing but discipline and commitment from them.

Osho who spoke after the team’s return from Ivory Coast said his target is to go all the win and winning the CAF Confederation Cup. This he insists is a mission possible once the players remain disciplined and show commitment.

“Having landed in the quarterfinals, we can go all the way. I have told the players we can do it. All I demand from them is discipline and commitment,” Osho said.

Enyimba chairman, Anyansi Agwu on his part has called for prayers declaring that the club’s performance at home is something to worry about.

“We need the prayer and support of everybody. This is a time everybody need to rally round the team. We will do our best and leave the rest to God who has always fought our battles for us,” Anyansi said.

Enyimba would on March 1 host Horoya in the first leg of their quarterfinal clash with the return leg billed for Conakry Guinea in a fortnight. Enyimba survived the group stage after finishing runners up behind Hossania Agadir of Morocco. Nigeria’s other club in the tournament, Rangers failed to progress beyond the group stage.

In the other pairings, Hossania Agadir would face Libyan side Al Nasr, while Pyramids of Egypt slugs it out with Zanaco of Zambia. Al Masry of Egypt and RS Berkane of Morocco are paired in the last quarter final game.