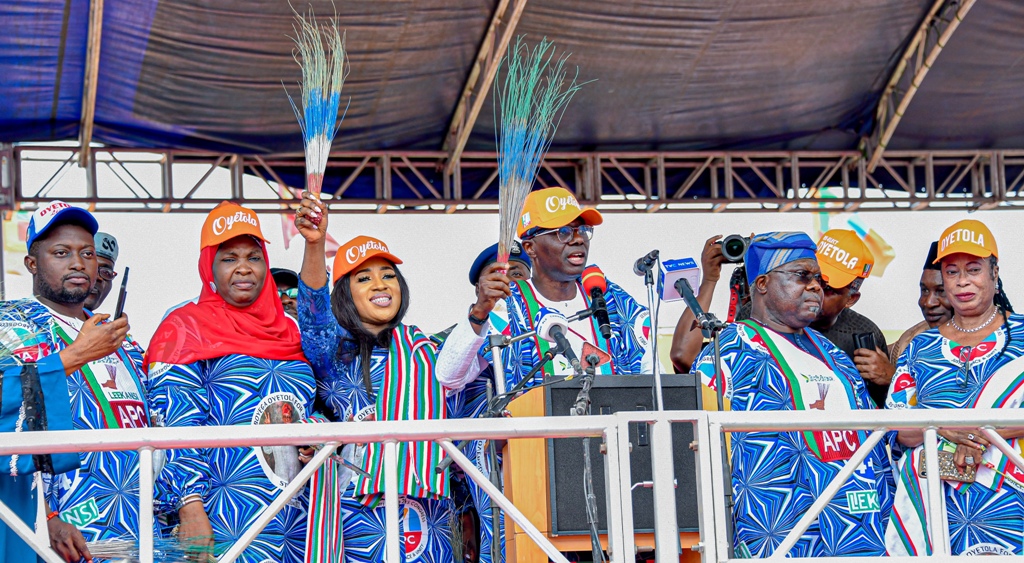 President Buhari, Tinubu, Sanwo-Olu, APC governors and leaders while speaking during the campaign rally, unanimously endorsed Governor Oyetola and urged the people of Osun State to vote for APC to ensure continuity of the lofty projects embarked upon by the APC-led administration in the state.

Speaking during the rally attended by thousands of residents of Osun State, President Buhari urged the electorate to come out in large numbers and vote for Governor Oyetola for continuity of good governance in the State of Osun.

He said Governor Oyetola deserved to be re-elected to consolidate what he had done in his first term.

President Buhari, who was represented by Tinubu, raised Governor Oyetola’s hand as the APC’s governorship candidate and appealed to all the people of Osun State to re-elect him.

“Go out with your PVCs and vote massively for APC and Governor Oyetola on Saturday. Think about your children and vote for Oyetola for a better future for them.

“You must all go out in large crowd on Saturday to re-elect Governor Oyetola. Don’t be deceived by PDP and other mushrooms parties. We must vote and defeat them,” Tinubu charged the people of Osun State.

The Senate President, Senator Ahmad Lawan, said Osun State in the last three and half years had witnessed great development and growth under the leadership of Governor Oyetola.

He described Oyetola as a prudent and good manager of human and material resources, adding that the governor has done a lot in his first term for him to be re-elected during the Saturday’s governorship poll.

Governor Sanwo-Olu in his address said his Osun State counterpart had performed very well in his first term and he is deserving of another term.

Sanwo-Olu, who is the Chairman of the APC National Campaign Council for Osun State Governorship election, said the electorate must vote and ensure that their votes count on Saturday.

He said: “Governor Oyetola has performed extremely well. He is deserving of another term. I have gone on campaign train with him and from what I have seen and heard, he has done very well.

“Don’t allow anybody to deceive you. There is no crisis in APC. We are united in our party.

“I want to urge you all to vote for APC and Governor Oyetola on Saturday so that he can continue the good work he is doing in Osun State. By God’s grace, we will come back for victory dance on Sunday.”

APC National Chairman, Senator Adamu while presenting the APC flag to Oyetola said the party is impressed by the good performance of the Osun State Governor and that is why it is supporting him for re-election.

He appealed to genuine APC members and the electorate to turn out in large numbers on Saturday to vote for Governor Oyetola.

“We are taking no chances and that is why we came out in full force to support our candidate, Governor Gboyega Oyetola.”

“Governor Oyetola has done so much since assuming the office of Governor in Osun State. He did very well during his first term and he deserved to be re-elected.

We pray for better performance in Osun than what we scored during the Ekiti State governorship election.”

Speaking on behalf of the Progressives Governors Forum, the Chairman of the forum and Kebbi State Governor, Senator Atiku Bagudu, assured the people of Osun State of good governance if they re-elect Oyetola for second term.

Atiku who reiterated the support of President Buhari, APC governors and party leaders for Oyetola, said the ruling party has done very well at the state and national levels to deserve continuity in office.

In their goodwill messages, Kano State Governor and co-chairman of the campaign council, Dr. Abdullahi Ganduje and Imo State Governor, Senator Hope Uzodinma, who addressed the rally in Hausa and Igbo languages appealed to the people of Osun State to re-elect Oyetola for him to be able to complete the good work he has started in the state.

Appreciating the massive support from President Buhari, Asiwaju Tinubu, APC governors and the party leaders as well as the people of Osun State, Governor Oyetola promised to do more than what he did for the people of his State during the first term.

“I will continue to deliver on my campaign promises. I want you to give me another opportunity to serve you for another term. You will enjoy me in my second term more than the first term.

“Don’t allow anybody to buy your future. You are honourable people. Come out on Saturday and vote for APC on Saturday,” he said.

The rally was attended by Governors, members of the National Working Committee of APC, ministers, members of National Assembly, party leaders, among others.