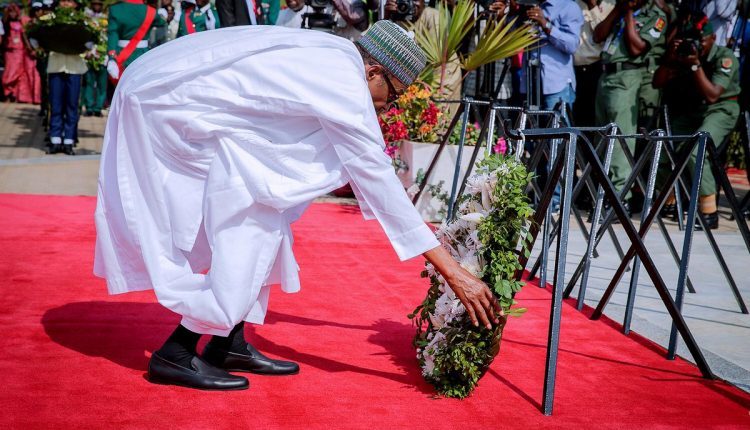 The 2019 Armed Forces and Remembrance Day celebrations came to an end, in Abuja, on Tuesday, with the laying of wreath at the National Cenotaph by President Muhammadu Buhari, Vice President Yemi Osinbajo and other top dignitaries.

Chief of Army Staff, Lt.-Gen. Tukur Buratai, who arrived the venue of the wreath laying ceremony at 11:07, was received by the commander Guards Brigade, Brig.-Gen. Tamar Musa.

The wreath laying ceremony started with prayers from the Director Champlain Services of the Nigerian Army, Brig-Gen. C. C. Oroegbo, who prayed for the peace and unity of the country and for God to protect members of the armed forces as they continue in their fight against the enemies.

On his part the Chaplain of Islamic Affairs Nigerian Navy, prayed for the widows of the fallen hero’s and their children they left behind.

He also prayed God to erase the evil on the minds of Nigerians against the President Buhari.

Also praying, the Director Chaplain Services of the Nigerian Air Force Group, Captain Dogo, prayed God to propel the Armed Forces to lead the nation to greater heights and prayed against anything that would cause the nation to separate.

He prayed God to protect the troops of the armed forces fighting the insurgents and other criminals terrorising the country with their deadly activists.

Also in attendance were representative of the diplomatic corps, Chairman Nigerian Legion, and the widow of late Lt. Col. Abu-Ali, Semira.

The wreath laying ceremony was followed by the signing of the register by the president and the opening of the pigeon cage to signify peace in the country.