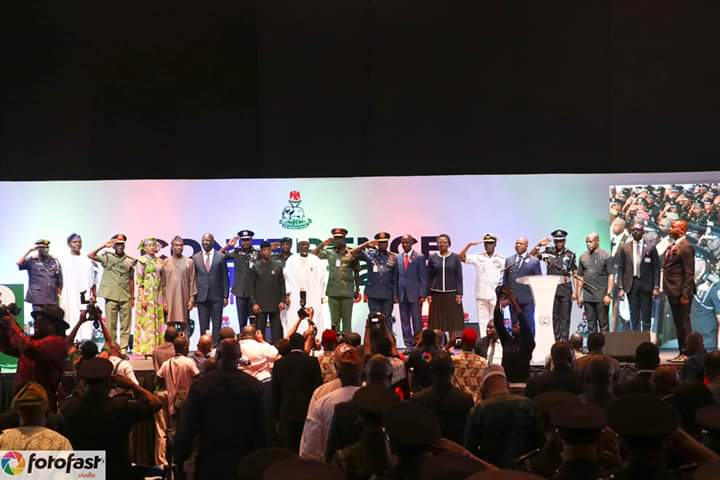 The Nigeria Police Force has, in the last 10 months, arrested over 5,000 suspects for murder, armed robbery, kidnapping and other sundry crimes.

This was stated by President Muhammadu Buhari, on Monday, during the inauguration of a three-day conference and retreat for senior police officers.

President Buhari, who commended the Nigeria Police Force for the feat,  urged them to act in accordance with the rule of law, while also observing the fundamental human rights of the citizenry.

While declaring the conference open at Eko Hotels & Suites, Victoria Island in Lagos, the president condemned acts of unlawful arrests, extrajudicial killings and the arbitrary use of firearms by some members of the force.

Speaking on what the retreat hopes to achieve, the  president, who was represented by the vice- president, Prof. Yemi Osinbajo said the retreat with the theme: ‘ Repositioning the Force for the Challenges of Effective Policing in the 21st Century’ will enrich the force with the skills needed to tackle the current and emerging security challenges.

According to him: “This retreat is appropriately timed and themed. It presents a unique opportunity not only to review internal security and policing issues but to acquire contemporary professional knowledge to undertake and partnership and networks needed to deal with current and anticipated internal security challenges.

“Aside from the threat of terrorism in the northeast, we are currently combating a series of crimes that constitute significant drawbacks to our national security.

“This includes kidnapping, banditry, armed robbery, cybercrime and the proliferation of small and light arms and the sundry national crimes.

“The dynamics of crime in the country have one-time become increasingly complex due largely to the impact of technology, global terrorism and social-economic challenges and other security challenges, especially in the African continent.

“It is in response to this that at the inception of the current administration, conscientious efforts were made toward putting in place policies that will engineer the Nigeria Police Force (NPF), and ensure the restoration of the force.

“The people want to see more compliance with the rule of law and the observance of human rights of the average Nigerian.

“Yes, we must arrest criminals, but we cannot harass young men on the streets, Most of whom are merely going about their legal businesses just they look successful and they are carrying laptops, terming them Yahoo Yahoo men and women.

“There are cases of extrajudicial killings, the excessive use of force and firearms by some members of the force. This conduct by a few must stop, impunity of any sort must stop and must be punished.

“The NPF is without a doubt one of our proudest national assets. The NPF has between January and now arrested over 2348 armed robbery suspects, over 1412 kidnap suspects, 684 murder suspect, 1513 cultists.

“A total of 826 kidnap victims were rescued, 1660 firearms were recovered, and 1612 vehicles stolen or used for crime are in the custody of the NPF.

“The police work in challenging conditions to make the country safe. The service the police renders is one that we cannot do without because it is closer to the average Nigerian. Therefore, Nigerians want our police force to do better.”

The President further stated that his administration would continue to support the training and retraining of security personnel at all levels and units, as well as providing them with the needed welfare, modern technology and gadgets to undertake their tasks.

Earlier, in his welcome address, the Inspector General of Police (IGP), Mohammed Adamu, said there was a strong correlation between personnel capacity and organisational performance, hence the need for the training .

Adamu’s words, “With the increasing complex and dynamic nature of crime that we, as the primary law enforcement agency, grapples with routinely, the risks we are regularly exposed to, and our obligation to perform our duties within the dictates of the law, the inter-mix of these requires the constant acquisition of professional knowledge by all police personnel, particularly, those at strategic management level.

“This is with a view to acquiring the capacity to dissect threats, appreciate complex security and crime situations, and take decisions, at times in split seconds, towards neutralising such threats or resolving identified crimes.

“The idea of this retreat is, therefore, in furtherance to our policing vision which emphasises capacity building as a pathway to enhancing effective police service delivery in the country.

“We firmly believe that with the constant engagement of strategic managers and consistent training and retraining of personnel of the force across all ranks, the expectation of the Federal Government and indeed, the nation at large for a police force that is knowledge-driven, rule of law guided, community-oriented, technology complaint, and intelligent led, shall be achieved.

“Through a professional forum of this nature, the personnel of the Nigerian Police shall be expected to acquire a high level of professionalism and competence required to neutralise any threat to our national security and give meaning to the constitutional provision that the security and welfare of the people shall be the primary purpose of government.”

Also delivering his address as the host Governor, Governor Babajide Sanwo -Olu, who was represented by his deputy, Dr Obafemi Hamzat, said the State Government will continue to work closely with the Nigeria Police Force to ensure adequate security in the state.

“There is no doubt that Nigeria is suffering from different security challenges and has managed to stay ahead. We have seen a lot of successes in the area of curbing crime in society, so the Police deserve our gratitude.

“ However, the police must urgently step up their games and develop technology to fight crime. It is my belief that this conference and retreat will help the senior Officers to ensure that we have a crime-free society,” he said.

The Minister of Police Affairs, Service Chiefs, Chairman of the Economic and Financial Crimes Commission, EFCC, some State Governors amongst others were represented at the occasion.